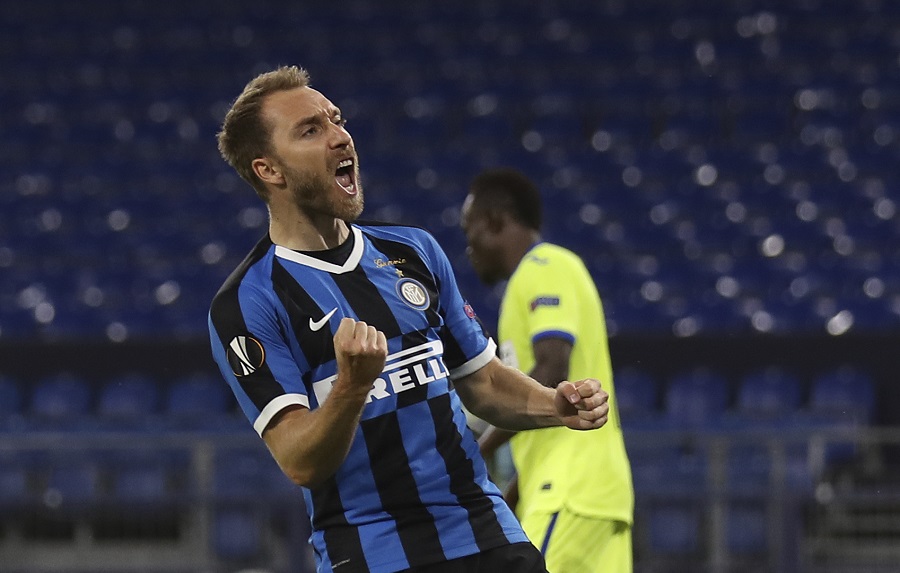 Inter Milan’s Christian Eriksen celebrates after scoring against Getafe during their Europa League round of 16 soccer match at the Veltins-Arena in Gelsenkirchen, Germany, on Wednesday. AP/PTI

Manchester United and Inter Milan booked their places in the Europa League quarterfinals as continental soccer returned in empty stadiums amid the coronavirus pandemic.

United beat LASK Linz 2-1 on Wednesday to complete a 7-1 aggregate win over the Austrian club, five months after the first leg was played.

LASK held the lead on the night for two minutes after Philipp Wiesinger's 55th-minute goal, but Jesse Lingard soon levelled for United. Anthony Martial scored another for United in the 88th.

"They haven't played for a while, some of these lads, and it showed," Manchester United coach Ole Gunnar Solskjaer said in televised comments.

The win sets up a quarterfinal reunion for Solskjaer with his former Norway teammate Stale Solbakken, the coach of Copenhagen. They played together at the 1998 World Cup.

Inter beat Getafe 2-0 with goals from Romelu Lukaku and Christian Eriksen. It was a one-off game played in Germany because they did not complete a first leg before the European season was suspended.

Lukaku gave Inter the lead with his 30th goal of the season, picking up Alessandro Bastoni's high pass in the 33rd minute and holding off a defender before stroking the ball low into the far corner.

Eriksen made it 2-0 in the 84th, hammering in a loose ball in the penalty area two minutes after he came on from the bench.

"I'm very happy for the team because I can see that they are eager to continue this adventure and not go on their holidays," said Inter coach Antonio Conte.

Getafe started stronger with an intense pressing game and could have taken the lead in the second minute, but Inter goalkeeper Samir Handanovic kept out Nemanja Maksimovic's header.

Inter gradually took control of the game against a Getafe team which had not played since July 19 and last won on June 29. Getafe keeper David Soria made a string of impressive saves before Lukaku's goal and reacted well to keep out an overhead kick from Danilo D'Ambrosio in the 49th.

Getafe had a chance to equalise in the 76th when Inter defender Diego Godin conceded a penalty for handball, but Jorge Molina fired his shot wide, preserving Handanovic's record of five games without conceding a goal.

Inter's quarterfinal opponent is likely to be Bayer Leverkusen, which leads Rangers 3-1 ahead of the second leg Thursday.

Shakhtar, the 2009 UEFA Cup winner, won 3-0 in the second leg against Wolfsburg to complete a 5-1 victory on aggregate. The Ukrainian club didn't score until a goal from Junior Moraes in the 89th minute. Moraes and Manor Solomon added a goal apiece in stoppage time.

Copenhagen reached the quarterfinals of a European competition for the first time after overturning a 1-0 deficit from the first leg against Istanbul Basaksehir to win 3-1 on aggregate thanks to two goals from Jonas Wind.

All games from the quarterfinals onward are being played in Germany over a single leg. None will have fans.

United players took a knee before their game, as all teams have done in the English Premier League since it restarted in June, and were joined by their Austrian opponents from LASK.

At the Inter-Getafe game, all players stood in silence around the centre circle after an announcement about the coronavirus. AP

76 die, 38 injured in floods in Maharashtra