Russian won 6-3 6-3; Djokovic can advance if he beats Alexander Zverev in a winner-takes-all match on Friday 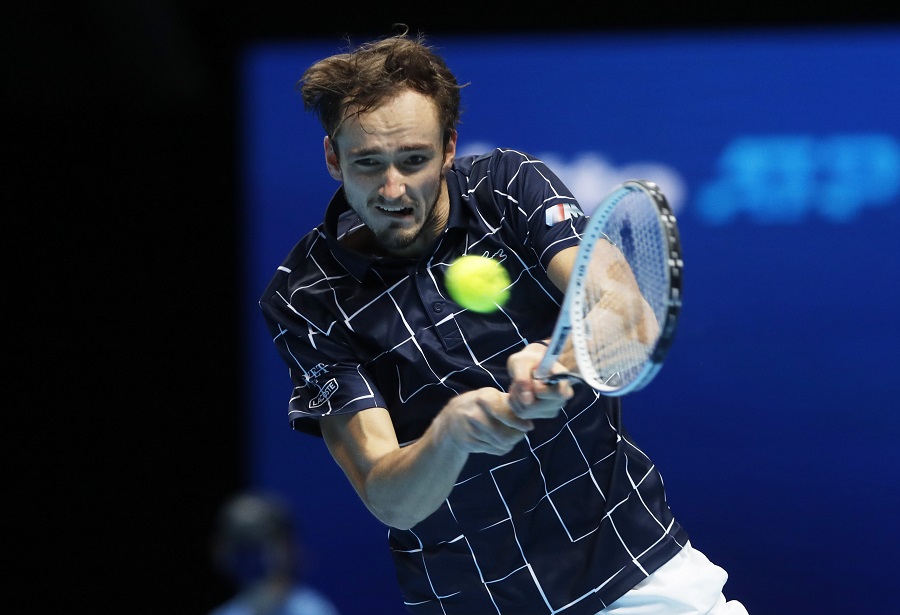 Daniil Medvedev in action during his group stage match against Novak Djokovic. Reuters

Daniil Medvedev is enjoying the ATP Finals a lot better in his second appearance.

Medvedev secured a spot in the semifinals of the season-ending tournament by dominating five-time champion Novak Djokovic 6-3 6-3 for his second straight win of the group stage.

Medvedev, who lost all three of his group matches last year on his tournament debut, has now beaten Djokovic in three of their last four meetings. The top-ranked Serb can still advance if he beats 2018 champion Alexander Zverev in a winner-takes-all match on Friday.

Zverev kept his tournament hopes alive with a 6-3 4-6 6-3 victory over Diego Schwartzman earlier on Wednesday.

Medvedev broke Djokovic three straight times to go from 3-3 in the first set to a 3-0 lead in the second. The first break came after a marathon game with the Russian finally converting his third break point when Djokovic missed a forehand following a long rally.

Djokovic then double-faulted on set point and never looked like to stage a comeback in the second. Medvedev saved the only break point he faced at 2-0 and then secured the victory with a forehand winner on his first match point.

“He was just better, no question about it,” said Djokovic. “Just not a great match from my side. I thought I could have and should have done better, but credit to him for playing on a high level.”

Medvedev is looking a lot more comfortable at the O2 Arena than last year, when his three losses included a collapse against Rafael Nadal in a match where he led 5-1 in the third set.

“You always have doubts in your head, like maybe next year is going to be (like) last year in London, I'm going to go out there and be tight, again, I'm not going to show anything in the Masters finals,” said Medvedev.

“Well, not the case. Finished No. 1 in the group already, which is great.”

Zverev, coming off what he had described as one of his worst matches of the season in his opening loss to Medvedev on Monday, led 3-1 in the second set before his Argentine opponent battled back with two breaks.

A visibly frustrated Zverev fired a ball into the empty stands after losing the second set.

The 23-year-old German recovered and broke Schwartzman twice in the third set. Schwartzman, who struggled with unforced errors, sent a forehand into the net to end the match.

The decisive Zverev-Djokovic match on Friday will be a rematch of the final from two years ago when the German won in straight sets.

“I'm happy to give myself a chance to go to the semifinals,” said Zverev. “I need to win every match, otherwise I'm out. So, I've got to go in with that mindset. I went to that mindset today, and I did my job.”

Schwartzman broke early in the first set, but like in Monday's loss to Djokovic he immediately gave it back. Zverev broke again for a 4-2 lead thanks to Schwartzman's unforced errors.

Rafael Nadal will play Stefanos Tsitsipas later on Thursday with a semifinal place at stake.

Nadal has lost to Tsitsipas just once in six meetings — at the 2019 Madrid Open. He beat Tsitsipas here last year in the round robin before the 22-year-old Greek went on to win the title.

Also on Thursday, Dominic Thiem, who has already qualified for the semifinals, faces Andrey Rublev. The Russian is 0-2 and can't advance. AP