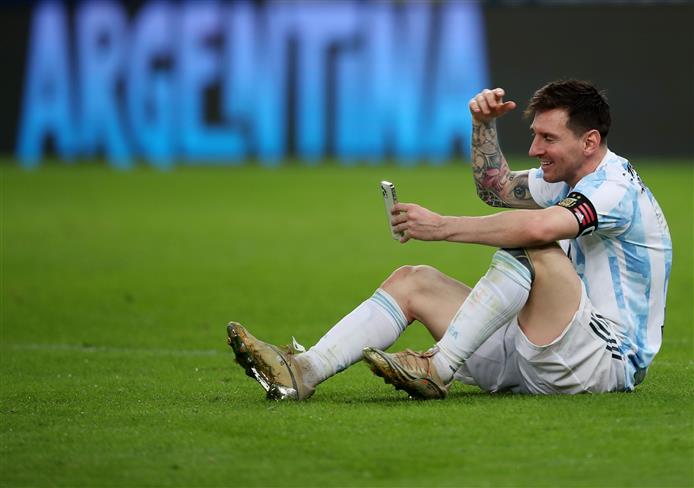 Brazil v ArgenArgentinas Lionel Messi in a video-call at the pitch after winning the Copa America. REUTERS

Argentina striker Lionel Messi video called his family immediately from the Maracana Stadium after Argentina won the Copa America Cup for the first time since 1993. The adorable moment has since gone viral on social media.

Messi called his wife Antonella Roccuzzo after Argentina beat Brazil 1-0 in the Copa America final on Sunday. It is a well-known fact that Messi is extremely close to his wife and three children, who are currently residing in Camp Nou, Barcelona. In the middle of the pitch, Messi was on a live video call with Antonella, flaunting his winners' medal with a lot of happiness and pride.

Sharing the screenshot of the video on Instagram, Antonella wrote "Your happiness is mine! Congrats, my love." Antonella also shared a video on Instagram of their three children -- Thiago, Mateo, and Ciro - singing a celebratory song after Argentina ended their wait of 28 years for a Copa America title. The video with the caption "Vamos Argentina" has clocked more than three million views in just two hours.

The Copa America trophy marks Messi's first-ever title at the international arena, something which eluded him for a long time.

Messi couldn't score a goal in the final. But he still edged Neymar for the Golden Boot award. He scored five goals in the tournament and had an equal number of assists.

Angel Di Maria's goal in the 22nd minute gave Argentina the early lead. Brazil tried very hard to equalise but failed to do so.