His infectious smile doesn’t give it away but Chopra has had his brush with low phases too; he underwent an arthroscopic surgery on the elbow of his right throwing arm in 2019 which kept him out of action for nearly a year but he came back stronger 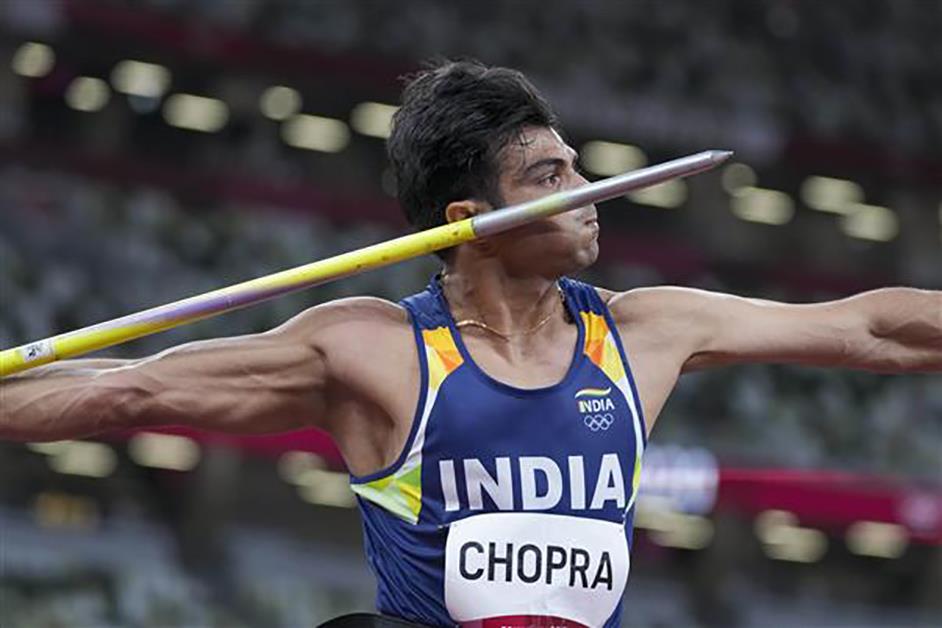 A plump kid took to athletics to lose weight and ended up being India’s first track-and-field Olympic gold-medallist.

That’s Neeraj Chopra’s life actually, all of 23 and a superstar, or dare one say a messiah, that Indian athletics had been waiting for over a century.

On Saturday, with his javelin in hand, Chopra was nothing short of a rockstar at Tokyo’s Olympic stadium, which should have been full to capacity to watch his genius unfold but had just a handful officials and coaches to cheer him on thanks to the Covid-19 pandemic.

He got everyone to cheer for him like he always does and didn’t even need to throw a personal best of 88.07m. The gold was sealed with the 87.58m throw, which was just his second of the final round.

But many years before this moment of greatness, Chopra was under tremendous pressure from his joint family of 17 to lose weight.

He was all of 13 at that point and had become a mischievous boy, often fiddling the bee hives on village trees and trying to pull buffaloes by their tails.

His father Satish Kumar Chopra wanted something to be done to discipline the boy.

So, after a lot of cajoling, the child finally agreed to do some running to shed the flab.

His uncle took him to Shivaji Stadium in Panipat—around 15 km from his village. Chopra wasn’t interested in running and almost instantly fell in love with javelin throw when he saw a few seniors practising at the stadium.

He decided to try his luck and as the cliched saying goes, rest is history, which would now probably make its way into school textbooks.

He has been a consistent performer since bursting into spotlight with a historic gold in the junior world championships in 2016 with an Under-20 world record of 86.48m which still stands.

His other achievements include gold medals in the 2018 Commonwealth Games and the Asian Games, besides the top finish in the 2017 Asian Championships. He is also a 2018 Arjuna Awardee.

His infectious smile doesn’t give it away but Chopra has had his brush with low phases too. He underwent an arthroscopic surgery on the elbow of his right throwing arm in 2019 which kept him out of action for nearly a year but he came back stronger.

In pursuit of excellence, it was a roller-coaster ride for the tall, sprightly and humble athlete after being pulled into the sport by senior javelin thrower Jaiveer Choudhary from a nearby village in 2011.

Chopra was game to it and after a few months, in search of better facilities, he shifted to the Tau Devi Lal Stadium in Panchkula. By the end of 2012, he had become the U-16 national champion.

At this point came the financial issues as Chopra needed accommodation, better equipment, a kit and better diet to go up the next level.

It was a tough decision for the joint family which owns less than 10 acres of land. But they pulled through and by 2015, Chopra had joined the national camp.

“We are farmers, nobody in the family has a government job and my family has been supporting me with difficulty. But it is a sort of relief now that I am able to support my family financially besides continuing with my training,” Chopra had told PTI in an interview after he was made a Junior Commission Officer in the Indian Army in 2017.

He is now a Naib Subedar.

“A medal in Tokyo Olympics is my target, it’s the ultimate for an athlete. I am still young and my best is yet to come,” he had said then.

In 2013, he took part in the World Youth Championships in Ukraine but returned without any medal. Next year, he won a silver in the Youth Olympics Qualification in Bangkok, his first international medal.

Chopra’s first medal in a national senior championship came in July 2015 during the Inter-State event in Chennai with a throw of 77.33m. A few months later, he won gold in the National Open Championships in Kolkata.

A few months later, under the guidance of late Australian coach Gary Calvert, Chopra created history during the world junior championships and announced the arrival of a truly world-class javelin thrower.

There is still a wall-hanging in the drawing room of Chopra’s ancestral home which features an oft-repeated motivational quote—“A single idea can light up your life.”

The Chopra family’s single idea to let him pursue javelin throw on Saturday lit up the country in its golden glow. PTI