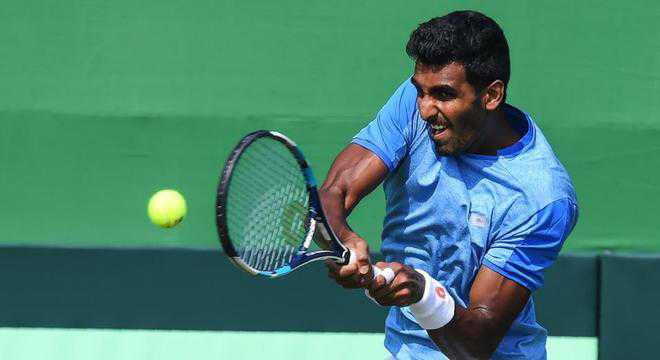 Prajnesh Gunneswaran reeled off seven games in a row before his opponent Tung-Lin Wu retired in the decider as the Indian tennis player entered the quarterfinals of the Orlando Challenger here.

The fourth seed Prajnesh was leading 5-7 7-5 2-0 when Wu opted out of the second round contest that had already spanned two hours 30 minutes.

Prajnesh was trailing 5-7 2-5 at one stage and the Taipei player was serving for the match but the Indian kept his nerves and forced a decider in the USD 52,080 hard court tournament by winning the next seven games.

Prajnesh, ranked 137, had reached the final of the Cary Challenger last week and has carried his good form into the Orlando Challenger.

It was third meeting between the two players. Prajnesh had beaten Wu at the Jinan Challenger event last year but gave him a walkover in Liuzhou.

Ramkumar Ramanathan had made a first round exit after losing 3-6 4-6 to local lucky loser Nick Chappell. It was his second consecutive first-round defeat after ending runner-up at the Eckental Challenger. PTI