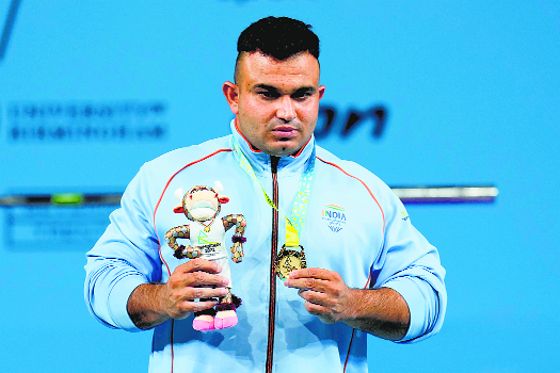 Para powerlifter Sudhir, who won the gold medal in the men’s heavyweight category on Thursday, cannot seem to shake the thought of his late father Rajbir Singh. Sudhir, the eldest of four brothers, lost his father four years ago. The devastating news came on the day he won a bronze medal at the Asian Para Games in Jakarta.

“I dedicate my gold medal to my father. He would be so proud today,” Sudhir told The Tribune on Friday. “We lost him to a heart attack on the very same day I won the bronze medal in Jakarta. I cannot explain how he impacted my career. We miss him a lot,” he added. Sudhir won the gold medal in the 88kg weight division with the Commonwealth Games record after he lifted 208kg in his first attempt and then 212kg to aggregate a total of 134.5 points. Importantly, this was the first gold medal won by an Indian para athlete at the CWG.

Nigeria’s Ikechukwu Christian Obichukwu won silver, while Britain’s Micky Yule bagged the bronze medal. “I am very happy that I won the gold medal. My preparations were good and I was confident,” he said.

“In training, I was regularly lifting weights upwards of 240kg but here I was a bit circumspect and decided to play safe for the gold rather than taking a risk. I am glad it worked out well for me,” he added. Sudhir, who hails from Lath village in Sonipat, Haryana, caught the powerlifting bug in 2013 after his mentor Virender Dhankar told him about the sport. “I started lifting to work on my physique,” the 27-year-old.

“I won my first national gold in 2015. I have not finished second since. I have won it for seven years straight now,” added Sudhir, who is a senior weightlifting coach in Haryana’s sports department.