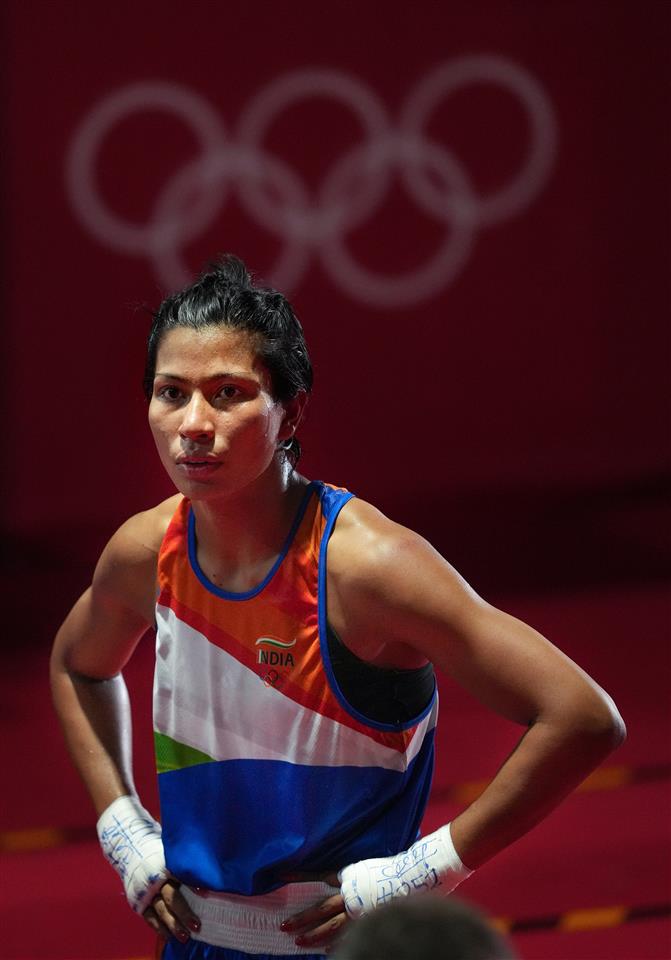 Lovlina Borgohain after losing her bout on Wednesday. PTI

Lovlina Borgohain’s “dogged determination” drew all-round praise as the country raised a toast to the young boxer for winning a bronze medal in her maiden Olympic Games.

Borgohain (69kg) signed off with a bronze medal after a 0-5 loss to reigning world champion Busenaz Surmeneli on Wednesday, bringing an end to the country's boxing campaign in Tokyo and adding a third medal to its overall tally.

"...With your hard work and dogged determination, you have done the nation proud. Your Bronze medal in boxing at the Olympics Games will inspire the youth, especially young women, to battle with challenges and turn their dreams into reality," President Ram Nath Kovind wrote on his Twitter handle.

The 23-year-old's bronze came after weightlifter Mirabai Chanu and shuttler PV Sindhu had secured a silver and bronze, respectively.

"Well fought @LovlinaBorgohai! Her success in the boxing ring inspires several Indians. Her tenacity and determination are admirable. Congratulations to her on winning the Bronze. Best wishes for her future endeavours. #Tokyo2020," Prime Minister Narendra Modi tweeted.

Borgohain stood up to the strong challenge of her opponent but came undone after Surmeneli got down to connecting her vicious hooks and body shots.

"Lovlina, you gave your best punch! India is extremely proud of what you have achieved! You've achieved a Third place medal in your first Olympics; the journey has just begun! Well done @LovlinaBorgohai," Thakur tweeted.

Former sports minister Kiren Rijiju wrote: "Dear @LovlinaBorgohai, you have made our country proud! Hearty congratulations on winning Olympic Bronze medal! We are extremely proud of your achievement!"

Wishing Borgohain for her success, BCCI secretary Jay Shah wrote: "Congratulations @LovlinaBorgohai for the Bronze medal. Being a debutant your phenomenal bout at @Tokyo2020 is an inspiration for many. This is just the beginning, you have long way to go. #Boxing #Cheer4India."

Borgohain is the third Indian boxer to ensure a podium finish at the showpiece after Vijender Singh (2008) and MC Mary Kom (2012) and Boxing Federation of India (BFI) president Ajay Singh hailed her as a "future World Champion" and a "role model".

"Meet our future world champion @LovlinaBorgohai. So proud of this young 23 year old woman. She fought the best boxer in the world with grit and determination and earned the first Olympic boxing medal for India after 9 years. Truly a role model for young women our country," he tweeted.

Vijender wrote: "And it's bronze in boxing. Proud of you #LovlinaBorgohain."

India's lone individual Olympic gold medallist Abhinav Bindra also congratulated Borgohain for her "stellar run" at the Olympics and shared his thoughts in a letter posted on twitter.

"To achieve a milestone of such difficulty while making your debut at the grandest sporting event in the world is nothing short of incredible. It speaks volumes of your immense grit and belief in your skills and not be overawed by the occasion."

Former sportspersons, including cricketers, also took to the social media to wish the boxer from Assam.

"There is no doubt that the Turkish World Champion Busenaz was a superior boxer. There is also no doubt that @LovlinaBorgohai gave it her all. Congrats on your bronze medal Lovlina. You have so much to be proud of," former India hockey player Viren Rasquinha tweeted.

Former India cricket captain Sachin Tendulkar said, "With your commitment and hard work, I am sure things will only get better from here." PTI