As India take on GB in quarterfinals today, spotlight is again on players from Punjab 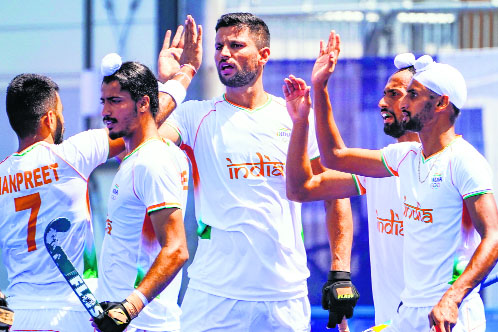 Of the 15 Indian goals, 13 were scored by Punjab players. Rupinderpal Singh (centre) has scored three so far. PTI

The Indian men’s hockey reached the quarterfinals at the Tokyo Olympics with a commanding performance in the pool stage, with players from Punjab powering it.

Over the last decade, Punjab's players have been a constant in the Indian teams. There were eight Punjab players in the 2014 World Cup squad and seven in the Commonwealth Games and Asian Games the same year. The number climbed to nine in the CWG, Asian Games and World Cup in 2018. The same has been the case with the junior team -- the 2013 junior World Cup team had 12 Punjab players, while the gold-winning team in the 2016 edition had 11 players from the state.

They finished second in the pool with 12 points, registering four wins and one loss. The only blemish for the side was their 7-1 loss to world No. 1 Australia, who finished on top. It was a one-off bad day for India, proven by the fact that they conceded just six goals in their other four matches, while scoring 14.

This is India’s best performance in the pool stage since the 1972 Games, when they finished on top. India had finished second in the pool in 1980 as well but they had garnered eight points from five matches then.

As has become the norm in recent years, Punjab was the driving in this team too: In the 18-member squad, 10 players are from Punjab -- captain Manpreet Singh, vice-captain Harmanpreet Singh, Varun Kumar, Rupinder Pal Singh, Hardik Singh, Dilpreet Singh, Gurjant Singh, Mandeep Singh, Shamsher Singh and Simranjeet Singh. Another player from the state, Krishan Pathak, is the reserve goalkeeper.

Of the 15 Indian goals in the pool stage, 13 were scored by Punjab players. Harmanpreet scored four, Rupinder three, Gurjant two, while Varun, Dilpreet, Shamsher and Simranjeet scored one each. Goal-scoring apart, players from Punjab have played a big part in the team’s success.

“It makes us very proud. It is the result of the work that started 16 years ago,” said Gurdev Singh, coach at the Surjit Hockey Academy in Jalandhar.

Apart from Rupinder, all players from Punjab are former trainees of the Surjit Hockey Academy.

“It was in 2005 that the revival of hockey in Punjab began,” said Avtar Singh, coach at the Surjit Hockey Academy. “A comprehensive plan was put together by Pargat Singh, who was the Director of Sports, and Sukhvir Singh Grewal, who was in charge of development of hockey in the state,” he added.

Avtar explained that from the beginning, great emphasis was given to the selection process, which sometimes involved over five days of trials. Grewal, who later served as the director training of the Punjab Institute of Sports, said that before 2005, "around 300 children used to show up at the trials". "This number increased to over 1500. There were only five or six academies active then. The number increased to around 40 academies -- five residential academies and over 30 day-boarder academies -- which train 7000 to 8000 children,” he added.

Gurdeep Singh, coach at the Mohali academy, said the coaches were themselves trained to catch up with modern hockey. "We were given access to literature and videos of training methods used by the leading hockey nations. We had continuous workshops; we even had a session with the Australian great Ric Charlesworth,” Gurdeep said. “The clinics we had with coaches and sports scientists from Australia’s Victoria University made a world of difference, teaching us about the overall development of young athletes.”