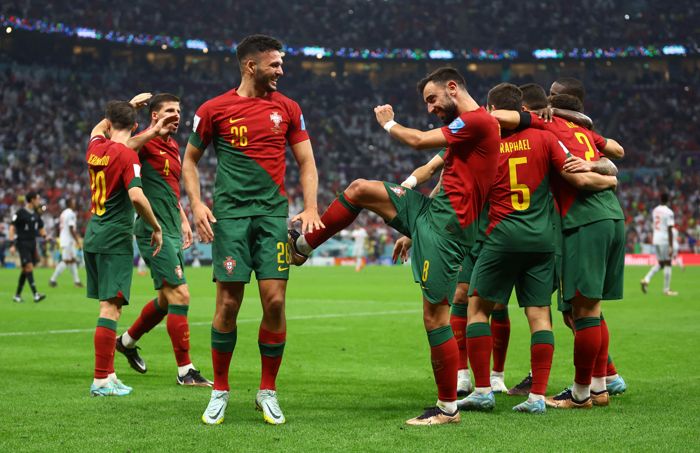 Portugal’s Goncalo Ramos (left) and Bruno Fernandes in a playful mood as the team celebrates its fourth goal. REUTERS

Portugal's Goncalo Ramos rose to the occasion on his first World Cup start to net a hat-trick in a 6-1 demolition of Switzerland on Tuesday, sending his side through to the quarterfinals for the first time in 16 years and setting up a clash with Morocco.

Ramos had played only 10 minutes as a substitute in Qatar but the youngster looked like he belonged on the big stage with a memorable performance for Portugal, who did not miss Ronaldo — a late substitute who had a goal ruled out for offside.

"Cristiano Ronaldo talks to me and everyone in the team. He's our leader and always tries to help," Ramos said after netting the first hat-trick of the tournament in Qatar. "I don't know if I will start the next game, that's up to the coach, I have to work as hard as I can and then we'll see."

After a tepid start, the game came to life when Ramos opened the scoring in the 17th minute by picking up Joao Felix's incisive pass before blasting the ball into the top corner from a tight angle to put the Portuguese ahead. 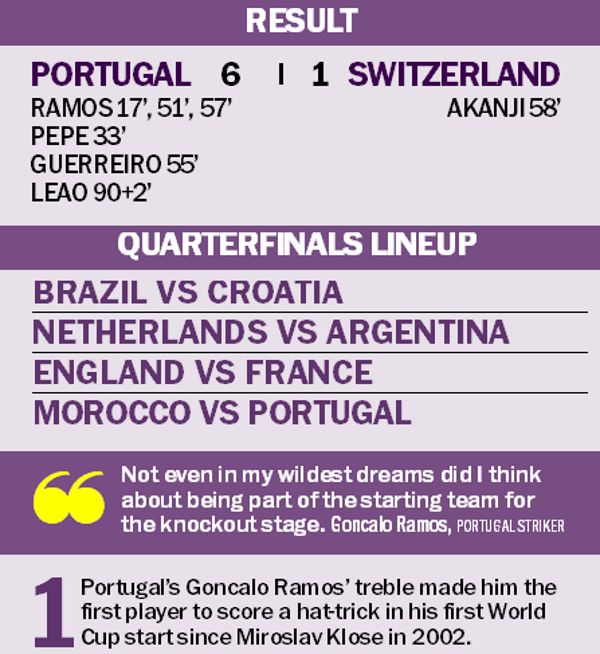 They doubled their lead through skipper Pepe when the 39-year-old timed his leap to perfection to rise above the two Swiss centre-backs and head home from a Bruno Fernandes corner in the 33rd minute, with Yann Sommer well beaten yet again.

At the other end, Switzerland striker Breel Embolo was frustrated by the Portugal defence despite the odd surging run into the final third, while their best chance came when Xherdan Shaqiri's free-kick was pushed out for a corner.

"We did not show the mentality that we usually bring onto the pitch," Sommer said. "It is a very bitter evening.”

1This was Portugal's biggest ever victory in the knockout rounds of the World Cup, scoring six goals outside the group stages for the first time.

31Cristiano Ronaldo didn't start a game for Portugal at a major tournament for the first time since 2008 (also against Switzerland), ending a 31-game streak. — Reuters

Benfica's Ramos is living the dream 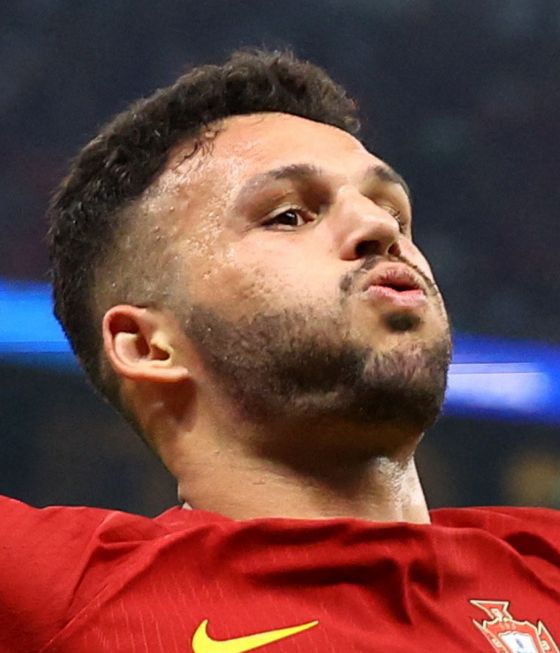 Lusail: Portugal's Goncalo Ramos was as surprised as anyone at being named in the starting line-up for Tuesday's 6-1 hammering of Switzerland in the World Cup last-16 stage and managing to score a hat-trick was beyond his imagination. Ramos, 21, made headlines before kick-off when the teams were announced, picked by Fernando Santos to lead the attack in place of Cristiano Ronaldo, who was relegated to the bench.

It did not take long for the youngster to become one of the biggest stories so far at the Qatar World Cup. "I think not even in my wildest dreams I thought about being in the starting 11 for the knockout phase," Ramos said, smiling.

Asked if Ronaldo spoke to him before the game, Ramos said the issue of him being benched did not come up among the players. "Honestly, in our team, no one talked about it. Cristiano as our captain, as he always did, he helped us, he gave encouragement to everyone." Asked who his role models were, he said: "Cristiano Ronaldo was one of them," together with Robert Lewandowski and Zlatan Ibrahimovic. reuters