Lyon eliminated Juventus on away goals after a 2-2 draw on aggregate; to face Manchester City in quarters 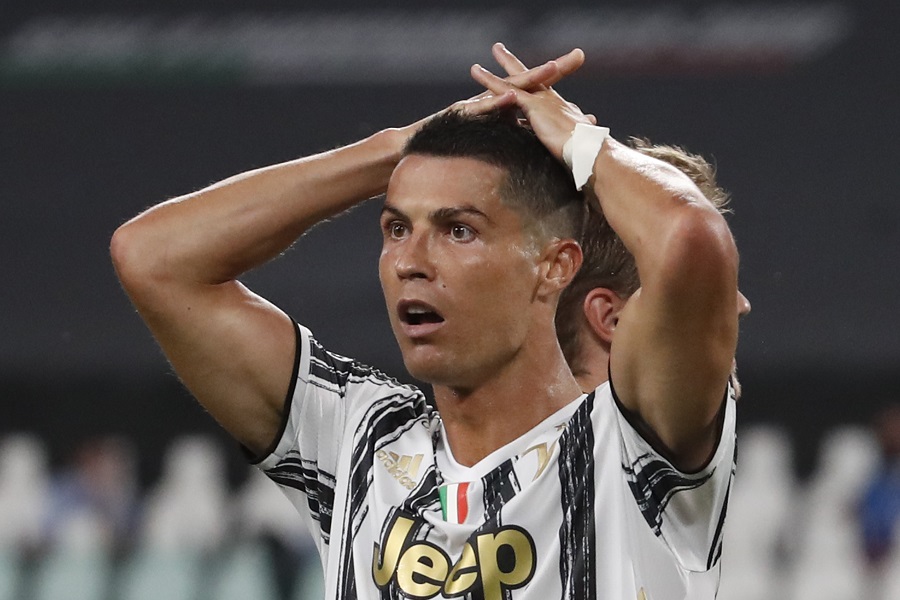 Juventus’ Cristiano Ronaldo reacts during their Champions League round of 16 second leg soccer match against Lyon at the Allianz stadium in Turin on Friday. AP/PTI

A Portugal international celebrated ecstatically at the end of the Champions League match between Juventus and Lyon.

But it wasn't Cristiano Ronaldo, who could only trudge off the pitch dejected after Juventus was eliminated from the competition despite his two goals securing a 2-1 victory in the rearranged second-leg match on Friday.

Lyon goalkeeper Anthony Lopes raced to the end where the away fans should have been, jumped over the advertising hoardings and sat on top of the Perspex fence at the front of the stands, kissing the badge on his shirt and pumping his fists in the air in celebration.

Lyon had eliminated Juventus and progressed to the quarterfinals on away goals after a 2-2 draw on aggregate.

“It's a huge joy. It was really hard,” Lopes said. “The group was incredible collectively and individually. It's the victory of the whole group.”

Lyon will face Manchester City in the single-elimination quarterfinals in Lisbon after the English team beat Real Madrid 2-1 on the night to progress 4-2 on aggregate.

“We have the ambition to go far in this competition,” Lopes continued. “We have the right to think about it, no one can take that away.

“We needed a real strength of character to do it tonight.”

There were no fans allowed in the stadium in Turin because of the coronavirus pandemic. Although a crowd of about 50 Juventus fans were outside to welcome their team as well as hurl insults at the Lyon team bus.

The Juventus-Lyon match was rescheduled from March 17 after the pandemic which shut down sports around the globe. The French league did not resume while Juventus struggled after the restart of Serie A but nevertheless claimed a record-extending ninth successive title.

Lyon captain Memphis Depay would not have been able to play had the match taken place as scheduled because he had a serious knee injury.

He scored an early penalty with a cheeky chip down the middle after Houssem Aouar went down in the area under a challenge from Rodrigo Bentancur.

Depay also conceded a penalty at the end of the first half after Miralem Pjanic's free kick hit his arm.

Ronaldo converted and doubled his tally on the hour mark when he curled a fantastic strike into the top right corner. It extended his all-time record in the competition to 131 goals.

That was Ronaldo's 37th goal in all competition for Juventus, breaking a 95-year-old club record.

Ronaldo went close to scoring the goal that would have seen Juventus through but headed a corner narrowly over the bar from close range.

Key Juventus forward Paulo Dybala was recovering from a thigh injury and was on the bench. He was brought on in the second half but had to be substituted just 14 minutes later.

“If I weren't morally devastated by the elimination, I would be happy with tonight's performance, because we brought out so much energy and the team responded with character.”

It was Juve's earliest elimination from the competition since the 2015-16 season. The club has, however, struggled to transfer its domestic domination to Europe and it hasn't won the Champions League since 1996.

“There is great disappointment, because this club has to aspire for more in Europe,” Pjanic said. “We must not belittle what we have done, because winning is not easy, we have made it seem so in recent years, but certainly in the Champions League, with this squad, this team can and must try to win.”

“However, I am convinced that this group will continue to do well.”

It was Pjanic's last match for Juventus as the midfielder will move to Barcelona in a swap deal for Arthur. AP