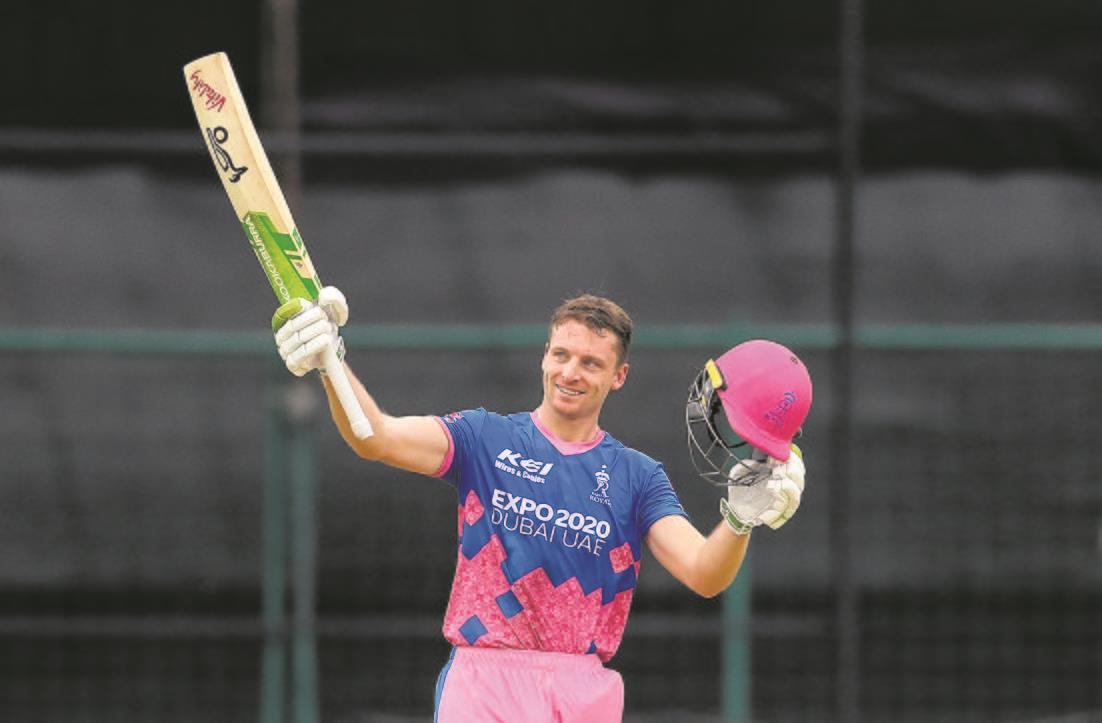 Jos Buttler smashed a 64-ball 124, the third 100 of IPL-14 and the top individual score of the season, to power Rajasthan Royals to an easy win over Sunrisers Hyderabad in their match here today. After Buttler and Sanju Samson (48 off 33 balls) propelled RR to 220/3, SRH could manage only 165/8 in their 20 overs, losing by 55 runs.

Opener Buttler hit a breathtaking 124 off 64 balls while Sanju Samson was effective in his 48 off 33 deliveries in RR’s 220/3. The two had a 150-run partnership for the second wicket after RR lost Yashasvi Jaiswal early for 12.

RR got off to a sedate start, managing only five runs in the first two overs. New SRH captain Kane Williamson, searching for wickets, introduced spin in the third over by bringing in star bowler Rashid Khan. Jaiswal smashed three fours off him before Rashid trapped the youngster lbw.

Samson, who was dropped on 23 by Manish Pandey, announced his arrival with a six over mid-wicket off pacer Khaleel Ahmed. Buttler, who looked in sublime touch, hit Bhuvneshwar Kumar for two boundaries in the sixth over as RR reached 42/1 in the Powerplay.

As Buttler later said, the small ground helped them get the boundaries, and the two got 18 runs off Vijay Shankar in the seventh over, with two sixers. Buttler and Samson upped the ante in the 13th over, plundering 17 runs off Sandeep Sharma. Mohammad Nabi was hammered for two sixers and two fours in the 15th over, and though Shankar got rid of Samson in the 17th over, RR still got 13 runs off it. In the 19th over, Buttler went 6, 4, 6, 4 off four balls from Sandeep before getting bowled off the last ball. RR had, though, reached a winning score by then.

SRH raced to 57 for no loss in six overs, but Rahman then got rid of Manish Pandey (31), and Jonny Bairstow (30) and Vijay Shankar (8) soon followed him back to the pavilion. Under pressure, Williamson (20) went for a big shot and was caught by Morris off Tyagi, and at 105/4, SRH needed 116 runs off seven overs at 16.5 an over. Though the tail struck some blows, SRH did not have enough firepower to pull off the big chase. — TNS, agencies

Ahmedabad: Delhi Capitals cantered to a seven-wicket win over Punjab Kings in the 29th match of IPL-14 here tonight to get to the top of the points table with 12 points from eight games. Set 167 to win, DC got there with 14 balls left, Shikhar Dhawan remaining unbeaten on 69 off 47 balls and Shimron Hetmyer hastening the end with 16 off fours balls, with one six and two fours. Dhawan and Prithvi Shaw (39 off 22 balls) had got DC’s chase off the ground with a partnership of 63 at over 10 runs an over. Steve Smith then chipped in with 25 off 22 balls in a partnership of 48 with Dhawan. When Smith fell, at 111/2, DC needed only 56 off 42 balls, which Dhawan and Hetmyer easily got.

Earlier, leading Punjab in the absence of KL Rahul, Mayank Agarwal made an unbeaten 99 off 58 balls (8 fours, 4 sixers) to take his team to 166/6. Agarwal was on 84, and not on strike, when the final over from Avesh Khan started. He got on the strike on the second ball and got a single. Back on strike for the final three balls, he went 4, 6, 4 to reach 99*. This was only the third unbeaten 99 in the history of the IPL, the previous being by Suresh Raina in 2013 and Chris Gayle in 2019. DC kept things tight in the powerplay, conceding 39 runs and sending back Prabhsimran Singh (12) and Gayle (13). Agarwal steadied the innings with IPL debutant Dawid Malan (26) as the two shared a 52-run partnership.