SAFF Championships: No time for fun in Maldives 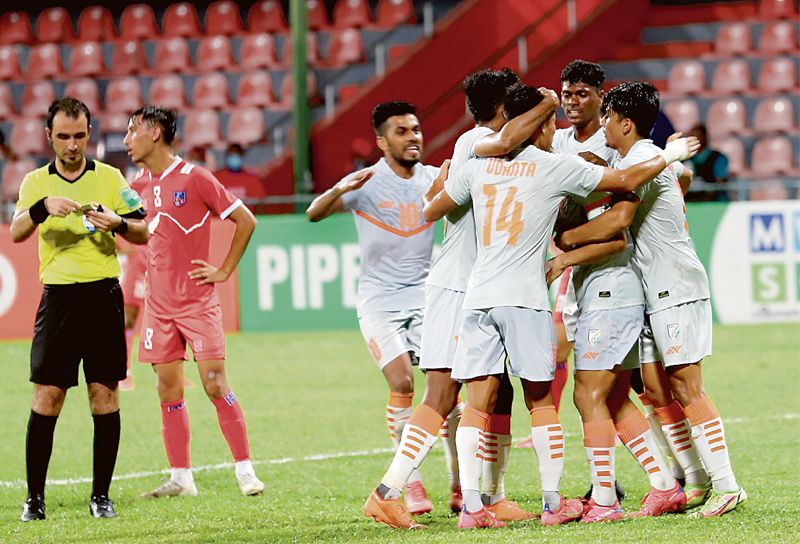 With five points from two draws and one win, India are currently third in the standings. - File photo

Unbeaten still but hugely disappointing so far, a beleaguered India face hosts Maldives in their last round-robin league match of the SAFF Championships here tomorrow, knowing well that nothing less than a win will save them from elimination.

A draw or a loss will send India out of reckoning for the final of the regional tournament and that will be the worst result for India in recent memory, which could also raise questions about head coach Igor Stimac’s continuation at the helm of affairs.

The worst performance for seven-time champions before this edition was the third-place finish in 2003 and India have either won or finished runners-up in previous 11 editions.

All the four top sides in the five-team tournament remain in contention for the October 16 final.

I’m quite happy with our performance in last three games. But there is an old problem which is following us and that’s converting chances. We cannot be dependent on just one player and need to be more confident in front of goal. The situation is a bit easier for Maldives as they need just a draw, and hence, it’s clear what we need to do in tomorrow’s game Igor Stimac, India coach

Understandably, Stimac has rued the inability of his forwards to convert the scoring chances.

“We need to improve our scoring from the chances which we are creating,” he said. “It is simple, if we do that, games become very easy. Otherwise you need to suffer till the end, or even beyond the end,” he added, still believing that his side can reach the final.

Two-time and defending champions Maldives have never been easy opponents for India in the history of this regional tournament though the island country sits 51 ranking points below India in FIFA chart at 158th.

The side led by veteran Ali Ashfaq, one of the best strikers in the region, have regrouped themselves after losing their opening match against Nepal, beating Bangladesh 2-0 and Sri Lanka 1-0. Just like India captain Sunil Chhetri, the 36-year-old Ashfaq has carried Maldives football on his shoulders for a long time and has scored two of his side’s three goals in this tournament. He will, no doubt, be the man India will have to be wary about. — PTI

Manama: The Indian women’s football team will face its toughest test of the ongoing exposure tour when the side takes on a higher ranked Chinese Taipei in an international friendly here on Wednesday. Coming off a 5-0 domination of Bahrain in their previous outing on Sunday, India will enter the match with some confidence and look to build on that big win. The players have had a good start under new head coach Thomas Dennerby, with two victories against UAE and Bahrain. PTI