The 25-year-old Kaur, who qualified for the final round as the second best thrower with a best effort of 64m, said she has "natural talent" to play cricket as a batsman 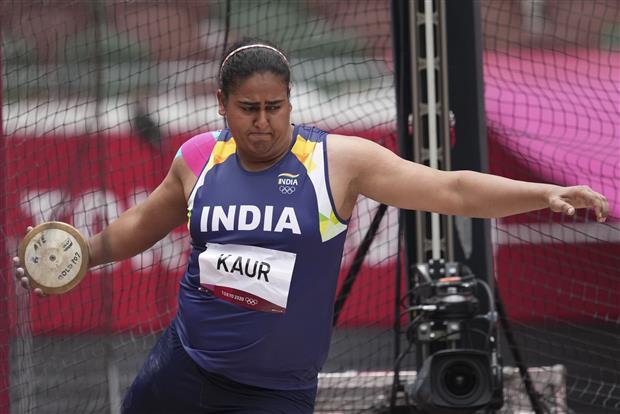 Kamalpreet Kaur, of India, competes during the qualification round of the womens discus throw at the 2020 Summer Olympics, Saturday, July 31, 2021, in Tokyo. AP/PTI

Stardom in athletics awaiting her after an impressive qualification show in the ongoing Tokyo Olympics, discus thrower Kamalpreet Kaur wants to also play cricket "some day" but only if it doesn't come in the way of her "first passion".

The 25-year-old Kaur, who qualified for the final round as the second best thrower with a best effort of 64m, said she has "natural talent" to play cricket as a batsman.

She had started trying her hand in cricket last year to handle the psychological toll of the coronavirus-forced lockdown.

"I am not leaving discus throw, this is my first passion. I want to repay Athletics Federation of India (AFI) and Sports Authority of India (SAI) with a medal on Monday. They have left no stone unturned for my training, competition etc.

"After the Olympics, I want to win medal in World Championships (2022) and gold in Asian Games," Kaur told PTI in an interview.

"But someday I want to play some cricket tournaments. That (cricket) is my second passion. I can continue athletics and play cricket also. I have played cricket in my village and nearby places. I feel I have natural talent to play cricket," added the athlete who stands at 6'1".

"I love to bat like a Sehwag or a Dhoni. They have less technique but can whack any bowler out of the ground. Especially Sehwag, I remember many great innings of him.

"One is that big innings (175 off 140 balls against Bangladesh) during the 2011 World Cup. How can I forget that? Another is his (Sehwag's) ODI double century against the West Indies (219 in Indore, also in 2011 in a bilateral series)." Asked about any other cricketer she likes, Kaur said, "I used to like Sachin Tendulkar, he is the God of cricket and then Rohit Sharma who has most double centuries (in ODIs), more than Sehwag." Coming back to athletics, Kaur said she was touched by the humility of Sandra Perkovic of Croatia and Valarie Allman of USA, who congratulated her after her performance in the qualification round.

"Perkovic is a great athlete with two Olympic gold medals (2012 and 2016), she was having her meal but then she came to me and congratulated me. The American Allman also did the same, she told me it was a very good effort from me. I was touched, I am like nobody when compared to them." She said, in contrast, her senior colleague in the Indian team had made "unsubstantiated" accusations on her.

Veteran Seema Punia, who failed to qualify for the final on Saturday, had asked the AFI to conduct a hyperandrogenism test on Kaur after her junior colleague produced two big throws of 65.06m and 66.59m recently to sit at number six in the world.

"I was hurt (by the accusation). She is senior to me and instead of giving guidance to me, she made accusations without any proof," Kaur said without taking any name.

Competing in her maiden Olympics in Tokyo and that too without her personal coach, Kaur said she was feeling nervous before the qualification round on Saturday.

"Olympics is a big occasion. I was feeling nervous before the throw. But after the first throw I felt better. By the third throw I was confident and that is why I touched 64m mark.

"I think I will be confident during the final. I feel I can better my personal best (of 66.59m) and win a medal for the country. That is my sole target now." Her personal coach Rakhi Tyagi could not accompany Kaur to Tokyo as her name was not in the long list submitted to the Olympics organisers months back. The AFI tried hard to get her accreditation but was not successful.

"Yes, it would have been better to have my coach with me. That also added the tension initially. A coach knows what is the best for his or her trainee and gives the mental support which is very much needed." Kaur also revealed that she was throwing with slight pain on her shoulder and knee.

"Did not you notice that I was having straps on my shoulder and knee? I had slight pain but it was not much of an issue. The shoulder pain developed a few days after the 66.59m throw (in June during Indian Grand Prix 4 in Patiala) and the knee pain is around two weeks old." She said but for the support of AFI and SAI, she would not have reached this stage.

"AFI arranged competitions before the Olympics and supported me in every way, including the mental aspect. SAI helped me financially (through TOPS) for my training, etc." PTI