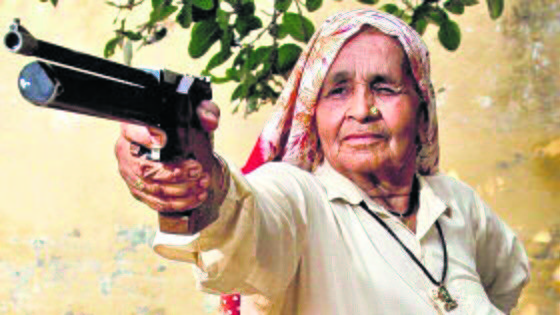 Chandro Tomar battled for her life for four days in hospital before succumbing to the virus.

Chandro Tomar, better known as ‘Shooter Dadi’, who became one of the oldest woman shooters in the world after taking up the sport in her 60s, died today after battling Covid-19 over the last few days.

The 89-year-old was being treated at a hospital in Meerut since April 26.

“Mera saath chhoot gaya, Chandro kaha chali gayi? (She has left me, Chandro where have you gone?),” her sister-in-law Prakashi Tomar, who is also one of the oldest female shooters in the world, wrote on her Twitter page.

Chandro was hospitalised after complaining of difficulty in breathing. Tests revealed she had contracted Covid-19. She battled for her life for four days in hospital before succumbing to the virus.

Hailing from the Baghpat village in Uttar Pradesh, Tomar was in her 60s when she picked up the gun for the first time. She went on to win many national competitions for veterans, her feats inspiring the award-winning Hindi movie Saand ki Aankh, released in 2019.

“Devastated by the news of Chandro Dadi’s demise. Feels like a part of me is gone. She made her own rules & paved the path for many girl to find their dream. Her legacy will live on in them. Condolences to the family. Am lucky I got to know and be her,” actor Bhumi Pednekar, who played Chandro in Saand ki Aankh, tweeted.

“I’m deeply saddened by tragic demise of our most lovable Dadi Chandro Tomar ji. She was inspiration for millions and will continue to inspire forever. May her soul rest in peace. Om Shanti,” Union Sports Minister Kiren Rijiju wrote on Twitter.

Wrestler Sushil Kumar, who knew her personally, wrote: “I am deeply saddened and again shocked after listening that we lost our another gem. Dadi Chandro Tomar was inspiration for many youngsters. You will be missed Dadi. RIP Dadi.”

Boxer Akhil Kumar also condoled her death. “Is this corona or something else, I am having doubts now. God, please have mercy. One more tragic news... Winner of many national awards, the free-spirited dadi ‘Shooter Dadi’ Chandro Tomar has lost her battle with corona. My heartfelt condolences and tributes,” Akhil wrote on Twitter. — TNS

19 hours ago
5
Chandigarh In Brief