Shotgun Sodhi teaches how to shoot down drones 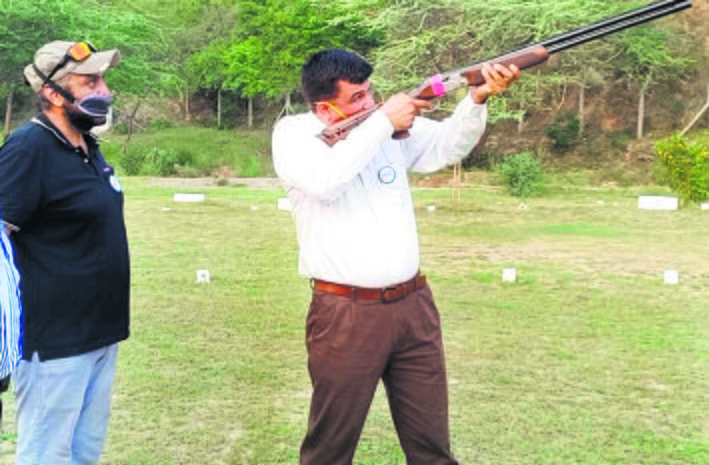 Haryana Police’s Drone Application and Research Centre (DARC) in Panchkula had a high-profile instructor on Sunday. Double trap ace Ronjan Sodhi taught Haryana Police commandos how to bring down a rogue drone with a shotgun.

DARC, which was set up recently, will train its recruits everything that is needed to know about drones, from their assembly to various uses. But Sunday’s session was organised to train the commandos how to bring down a drone with a shotgun.

I know that in America they (police) train with shotguns and in Colorado Springs, shotgun shooters have trained the American army in the past. So this is a welcome move from Haryana Police — Ronjan Sodhi, 2010 Asiad Gold Medallist

Sodhi, who has won two ISSF World Cup Finals gold medals in double trap and an Asian Games gold in 2010, began by training the commandos to shoot down clay targets. They were then asked to shoot down the drones.

Sodhi, a Rajiv Gandhi Khel Ratna winner, was excited at working with Haryana Police. “This I believe is the first ever training of this kind in India. I know that in America they (police) train with shotguns and in Colorado Springs, shotgun shooters have trained the American army in the past. So this is a welcome move from Haryana Police,” Sodhi said.

“Police personnel only use pistols or rifles, with which it is impossible to bring drones down. A shotgun is the only answer. The training was all practical exercise. First I made them shoot a few clay targets and then we flew some drones and some of them were shot down. Even the officers took part in the training,” Sodhi added.

Anil Rao, Additional Director General of Police (CID wing), who planned and conceptualised DARC, said training is needed to create more awareness about how drones could be used by criminals, including to target VVIPs.

“You would have read what was happening in Punjab. Drones were being used to drop drugs and weapons. It is not limited to delivery only, one can fire a weapon from a drone,” Rao told The Tribune.

“So one can fit a weapon, maybe a 9mm gun, and can operate it sitting kilometres away. Shooting it down is the only option, and who better than a trap shooter to tell us how,” he added. “That’s where Ronjan came in. This is not a one-off session, we will call other shooters as well. We have the weapons, we have the range and have also procured clay target machines. Hopefully, it will do good for the state of Haryana.”

Rao was among the lucky few who were able to shoot down a drone. “I brought it down with my first shot,” he said.

New Delhi: Hoping for a mid-August resumption of the camps for its Olympics core group, the National Rifle Association of India (NRAI) office-bearers will meet on July 15 to review the situation and explore the limited options left with them amid the Covid-19 pandemic. The NRAI has recently released a list of 34 shooters who will be training separately for the quadrennial sporting extravaganza scheduled to be held next summer. These shooters form the core group for the Olympics. “There is a meeting on July 15 in which the NRAI officials will review the situation and explore the few options they have on their plate as far as resumption of the camps is concerned,” an NRAI official said. — PTI