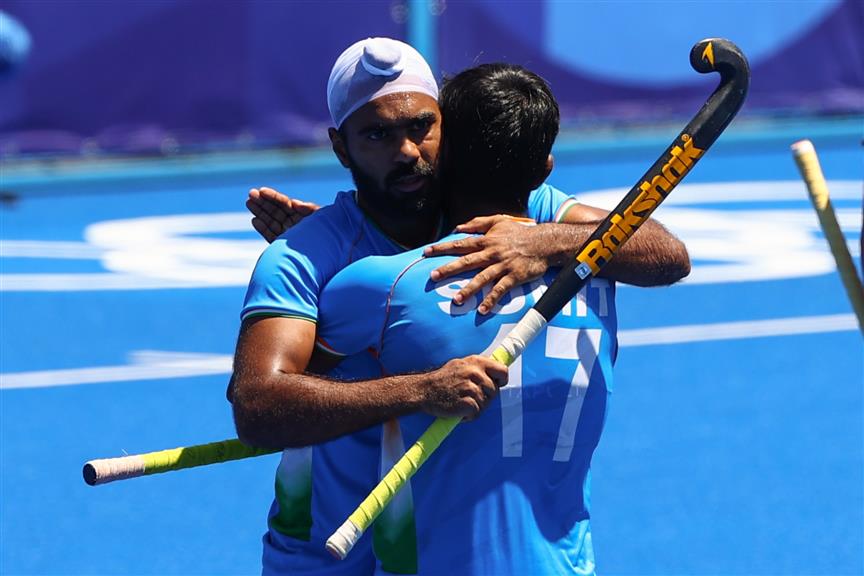 Simranjeet Singh of India celebrates with teammate Sumit of India after scoring. Reuters

Midfielder Simranjeet Singh’s passion for hockey was such that he chose to come back to his ancestral village, Chahal Kalan in Batala, leaving behind his family in Pilibhit 14 years ago. Father Iqbal Singh and mother Manjit Kaur had migrated to UP for farming some years back.

While father Iqbal Singh found his love for farming in the 32 acres of fertile land in UP, son Simranjeet’s passion for hockey bloomed in the grassy playground of Guru Nanak Hockey Academy in Chahal Kalan, 10 km from Batala in Gurdaspur district.

The village already has three sons who have represented India at the international tournaments and several who have played at the national level.

Till Class IV, Simranjeet had studied in Pilibhit along with his younger brother Arshjeet Singh who later moved to Australia. The half-yearly visits of uncle Rashpal Singh, a hockey enthusiast, and cousin Satinderjeet Singh, the best hockey player among the siblings, egged Simranjeet’s desire to follow his trail.

The news clippings of Satinderjeet’s hockey feats only fanned the fires of the 10-year-old wannabe. Given the environment and the facilities in their village, 25 km from Pilibhit, it looked impossible. The 10-year-old was spurred to pack his bag and seek destiny in Punjab.

So, when the extended family was heading back to Chahal Kalan, Simranjeet held his aunt’s hand and insisted that he be taken along.

It has been almost 14 years Simranjeet has been staying in Chahal Kalan and honing his skills at the Surjit Hockey Academy in Jalandhar before joining the national camp. The 24-year-old made his India debut in 2018. From besting siblings in Punjab, Simranjeet didn’t know when he turned to beating the best in the world.

The historic brace (17 minutes and 34 minutes) Simranjeet scored against Germany in India’s 5-4 win in the bronze medal match has proved that the decision he took 14 years ago, was right.