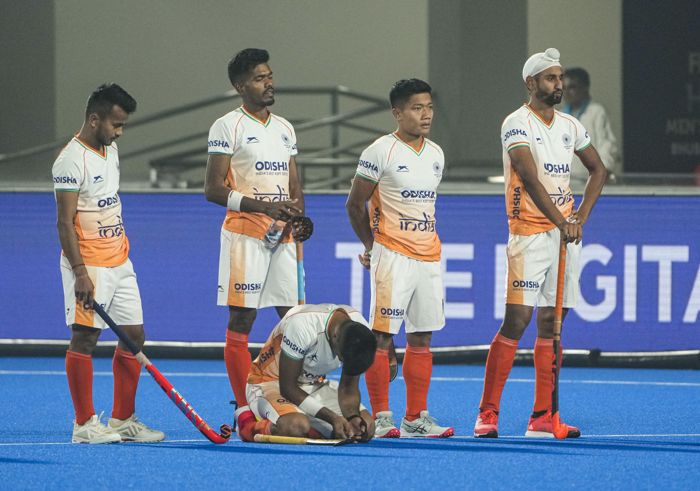 Relying on direct play and lightning counterattacks, one of the issues India need to look at is variation in their tempo when attacking. pti

India’s World Cup campaign met with sudden death on Sunday. The signs, though, were there to see for over a year.

The Tokyo Olympics bronze helped India restore its lost pride and respect in the hockey circles. The medal, however, also put a big target on India’s back, and they could no longer fly under the radar as they did in Tokyo. That is a big reason why India have not been able to recreate that form since winning the medal in August 2021.

They were beaten by Japan in the semifinals of the Asian Champions Trophy in late 2021. Early in 2022, they were beaten by both France and Spain in the Pro League. In the Commonwealth Games, they were held 4-4 by England after twice conceding a three-goal lead. In October, Spain again beat India at the start of the new Pro League season. The surprise shootout loss to New Zealand is the latest in India’s string of unfavourable results.

In all these matches, there was a common thread that helped the other teams unravel India’s game.

Playing a high-paced game, India prefer directness in attack — they prominently rely on fast counterattacks, but also use long, usually aerial, passes to quickly get the ball into the opponent’s defensive third. Their attack, though, lacks variation in tempo. As they do not hold on to the ball for long periods, every time that final play does not work out, and India give away possession, they also lose some control over the game.

In the crossover game, that gave New Zealand a chance to dictate the tempo. Even when they were behind, the Kiwis patiently built their attacks. Like the aforementioned teams, the Kiwis exploited India’s limitations in adapting to the changing pace. As the pace drops, India’s intensity level suffers, which also affects the efficacy of their high press. They start losing the common balls. They also lose concentration and start making basic technical errors in passing, receiving and player-marking, leading to defensive lapses.

The template was set by Belgium with their impressive 5-2 win over India in the semifinals of the Tokyo Olympics. Despite trailing 1-2, they slowed down the game by controlling possession and hit India in small bursts, scoring thrice in the final period.

This high-intensity character of India’s game demands a high conversion rate, from attacks to goals or, at least, penalty corners. India’s success at the Olympics was built on determination, luck and penalty corner conversions. India have failed to match that determination since, even as drag-flicker Harmanpreet Singh had been helping them over the line.

Their measured and focused performance against Spain in the opener of the World Cup had raised false hopes. Even as they squandered chances from open play and penalty corners — due to a sudden dip in Harmanpreet’s form — India’s defence looked solid in the pool matches. While India’s profligacy did come back to bite them in the crucial knockout game, it was not the only reason for their defeat.

“Yeah it is a factor but not the only factor,” India coach Graham Reid said. “We still created enough chances to win. The problem was every time we won the ball we gave it back to them, and that was the telling factor. At this level, you can’t do that. It was about consistency. We let ourselves down in the last quarter, threw away the ball too much,” he added.

Reid admitted that pressure might have played a part in the defeat, adding that he was thinking of getting a mental coach for the team. “I am sure pressure and expectations all come into the mix. We made mistakes which we don’t normally make. Following this, we will try and work out how to get a mental coach involved. We need to do something differently perhaps,” Reid said.

What Reid does not realise is that the benefits of the mental coach will just be limited to the Indian camp. India’s sharp fall from the Tokyo bronze to their lowest finish at a home World Cup raises a deeper issue — the country needs uniformity in the level of training, facilities and tournaments from the national team set-up down to the grassroots. It will help develop tactically, technically and physically more mature players from a younger age. It will not only enable a smoother transition in the Indian team but also help the country achieve consistent success at the highest level.