Sultan of Johor Cup: India bounce back with 5-1 victory : The Tribune India

Sultan of Johor Cup: India bounce back with 5-1 victory 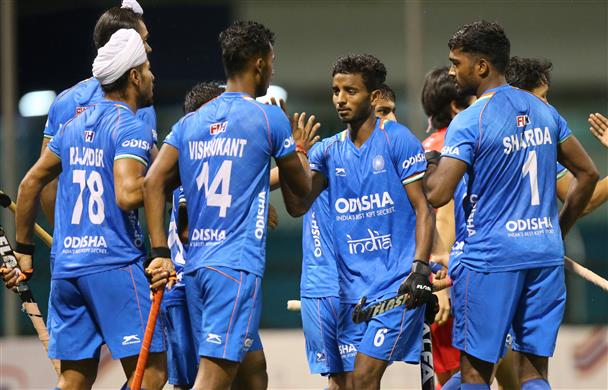 India’s players celebrate after their win over Japan. HI

After a delayed start, India got out of the blocks quickly. Uttam beat the Japanese goalkeeper following a spell of domination. And even though Japan threatened with a couple of penalty corners, India’s defence did not allow them much space.

India absorbed the pressure from Japan, before Rohit fired home a penalty corner to give his side a 2-0 lead. Japan pulled one back through Saeki, who converted a penalty corner.

In the second quarter, both teams traded blows in the first few minutes before India regained their two-goal lead as Purty found the back of the net with a crisp shot from the top of the circle.

India started brightly in the second half, as Dhami added a fourth. Japan earned a fifth penalty corner, but a bad trap allowed the Indian defence to clear their lines. Japan did step it up in the final minutes of the quarter, but India kept them out, maintaining the three-goal lead.

In need of a quick goal in the final quarter, Japan went on the attack from the start, but India dug deep and controlled the situation well.

Having dealt with the initial flurry of attacks, India stepped up the ante and Lakra converted a penalty corner.

India will take on Australia in their fourth game tomorrow. Australia beat defending champions Great Britain 3-1 to make it three wins in three games. They lead the table with nine points. India are second with six points, ahead of South Africa on goal difference. South Africa defeated hosts Malaysia 3-1 today.

Bhubaneswar: Harmanpreet Singh was today appointed the captain of a 22-member Indian men’s hockey team for its FIH Pro League matches against Spain and New Zealand here. Manpreet Singh has been named as his deputy. India will open their campaign against New Zealand on October 28 before taking on Spain on October 30. The hosts will again play New Zealand on November 4 and face Spain on November 6. “We are continuing to expand the leadership skills of the group with Harmanpreet being selected as captain for these first four games,” chief coach Graham Reid said.

The team will also see some fresh faces in Mohd Raheel Mouseen, who was part of India’s victorious outing in the FIH Hockey 5s earlier this year, and S Karthi, who played his maiden tournament for India at the Asia Cup. Raheel was the leading goal scorer and the Player of the Tournament at the Hockey 5s. PTI