Sweets from mother await Neeraj Chopra on arrival in India : The Tribune India

Sweets from mother await Neeraj Chopra on arrival in India

Chopra, along with other members of the Indian contingent at the Tokyo Olympics, arrived at the IGI Airport in New Delhi on Monday evening 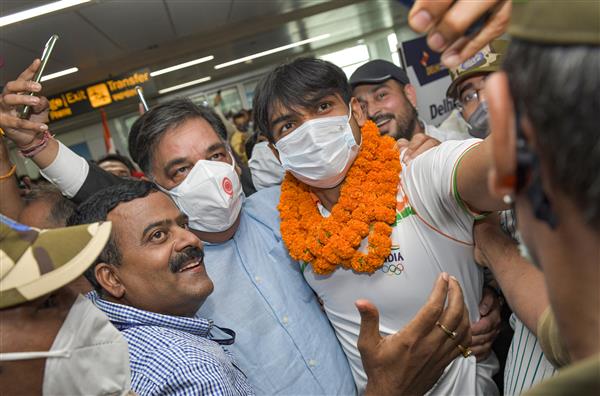 Olympic gold medallist Neeraj Chopra being welcomed on his arrival at IGI Airport, after the end of the Tokyo Summer Olympics 2020, in New Delhi. PTI

Chopra, along with other members of the Indian contingent at the Tokyo Olympics, arrived at the IGI Airport in New Delhi on Monday evening.

The seven medal winners at the Tokyo Olympics will be felicitated at a function at the Ashoka Hotel in Chanakyapuri later in the evening.

On being asked about the prospect of gold medals in future competitions, Kumar was affirmative. “Definitely. We have expectations of two more Olympics.”

Chopra’s mother Saroj Devi revealed that she had brought a box of sweets for her son.

“When the box is opened, then the sweets will be revealed.” She further said that Chopra likes choorma (a dessert made of coarsely ground wheat crushed and cooked with ghee and sugar).

“When he comes home, all of us will eat choorma together,” said Saroj with a laugh.

Asked about what his first words to the 23-year-old will be, Kumar said, “It will be shabaash beta (Well done, son). You did very well.”

On Saturday, Chopra threw 87.58m to win the gold medal in men’s javelin throw at the Tokyo Olympics. He became the second Indian individual athlete after Abhinav Bindra to clinch a gold medal at the Olympics.

In the qualification round for the final, Chopra had topped the table with a throw of 86.65m. IANS