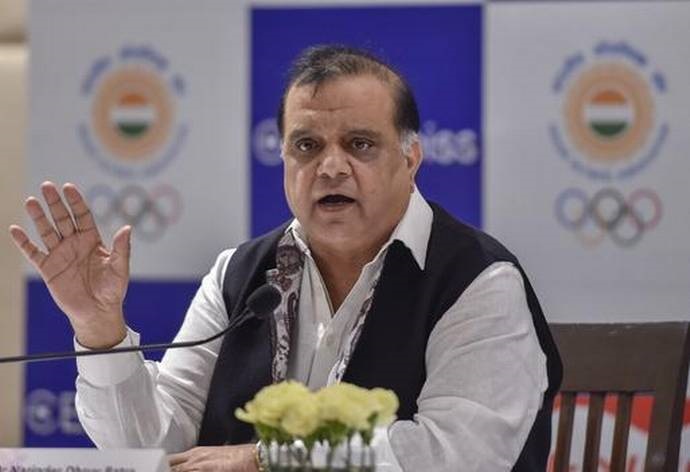 With a little over three months left for the Indian Olympic Association (IOA) elections, the infighting within the body has once again intensified.

After IOA president Narinder Batra issued a notice to the Handball Federation of India (HFI) threatening disaffiliation for alleged financial irregularities, treasurer Anandeshwar Panday has hit back with his own notice seeking clarifications about a purported loan on IOA’s books on account of renovation of Batra’s office.

Panday, now the executive director of HFI, has cited the internal auditor report of VK Bajaj & Co, appointed by Batra, where in Rs 36.19 lakh were spent on renovation of the second floor office of IOA. Panday further stated that as per the internal report a private company, Super Parts P Ltd, has loaned equipment worth Rs 36.19 lakh to IOA, but the company has not provided the bills for this despite several reminders.

“…I ask you (Narinder) Batra ji to once and for all confirm whether your private company, M/s Super Parts P. Ltd has spent Rs 36.19 lacs on your office or not. If yes, is there a loan agreement, which has created a liability of Rs 36.19 lacs payable by IOA to Super Parts P. Ltd? If not, then how has the name of Super Parts appeared in the books of IOA?” Panday said in his notice on Tuesday.

“In such a case this will be a fraud which will have to be investigated and financial responsibility of an attempt to misappropriate will have to be fixed on the people responsible for the same,” he added.

In addition, Panday has alleged that a few invoices indicate that the money may have come from Hockey India, although the HI book has no entry of this transaction.

“…Has Super Parts P. Ltd spent Rs. 36.19 lakh or has this money been spent by Hockey India? Please answer truthfully. I have checked accounts of Hockey India and there is no mention of Rs 36.19 lakh spent by HI on renovation of your office on 2nd floor IOA Bhawan. However, from the Fixed Assets file maintained by V. K. Bajaj & Co. kept in IOA a few GST Invoices found in this regard issued to Hockey India in relation to renovation of A-Block, second floor, Indian Olympic Association,” Panday said.

On August 16, Batra had put HFI on notice. “…I would further like to apprise you that as per Article 27.1.3 of Constitution of IOA non submission annual audited statement of accounts, annual report and list of current office-bearers within the stipulated time period to IOA is a ground for disaffiliation of a NSF. Since, the statement of accounts/Balance sheets and other such financial documents submitted by the HFI to the IOA are prima facie forged on account of denial of signatures by two out of three signatories, the said submission by HFI for last 4 years is as good as non-submission of such documents. Therefore, considering the above HFI is also liable for disaffiliation from IOA,” Batra wrote in his letter

“I am also duty-bound to inform the Ministry of Youth Affairs and Sports as the Handball Federation of India also received grants from the Ministry. I request you to respond to the present notice within the specified time,” he added.