Throw in the dark 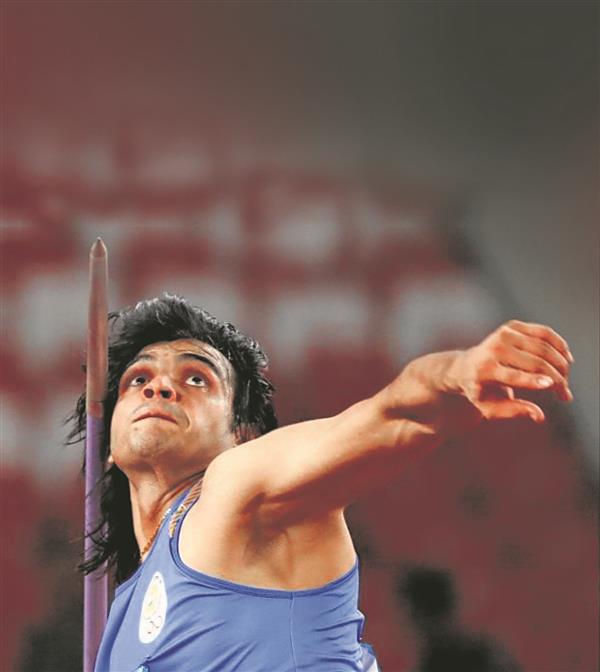 It will be his first appearance at the Olympic Games. And if he steps onto the podium, Neeraj Chopra would end independent India’s lugubrious athletics medal drought.

An elbow injury and the following surgery in May 2019 had sidelined Chopra for more than six months. He missed the entire 2019 season. However, he came back stronger. His throw of 87.86m at the Athletics Central North East League meeting in Potchefstroom, South Africa — his first competition after the injury — confirmed the trip to Tokyo.

Now, he’s raring to go at the Games. The javelin thrower is the country’s great hope to bring home a medal. He comes into the mega event with a strong domestic performance. He threw to 88.07m at the Indian Grand Prix in March to overwrite his own national record. He also won gold at the Federation Cup with a throw of 87.80m this year.

Punjab’s Kamalpreet Kaur broke the national discus throw record last month with a throw of 66.59m — good for her to be placed sixth in the world this year. India have never won a track and field medal at the Olympics. This time around, while Neeraj Chopra is in the limelight, Kamalpreet with her show has ignited a faint flicker of hope. Kamalpreet is among nine Indian athletes for Tokyo — out of 16 who have qualified individually — who have broken national records this year. Twelve made it to Tokyo after achieving the tough qualification standards, while four — 400m hurdler MP Jabir, 50km race-walker Gurpreet Singh, sprinter Dutee Chand and discus thrower Annu Rani — made it through the world rankings. India’s athletes would hope to achieve personal bests, and some of them would hope to reach the finals of their events. The likeliest to do that would be long jumper M Sreeshankar, shot putter Tajinderpal Singh Toor, steeplechaser Avinash Sable.

But the very word ‘Olympics’ is as much frightening as it is tempting. When an athlete takes the field, shouldering the weight of the nation’s expectations, things can go very different from his or her expectations. At a time when one would rue the lack of competitive exposure due to the pandemic, the 23-year-old has remained optimistic and confident.

Tokyo will have a somewhat depleted field. Germany’s defending champion Thomas Roehler would not be competing due to a back injury. However, another German, Johannes Vetter, the world No. 1, is the firm favourite. Vetter has been in terrific form. His seven throws of over 90m this season would send shivers down anyone’s spine. This gives him a huge psychological advantage. Also, he’s one of only two throwers to have breached the 95m mark. His astonishing throw of 97.76m in September 2020 was close to the mark of world record holder Jan Zelezny, who threw the spear to 98.48m in 1996.

With Vetter seeming to have a lock on gold, silver and bronze are up for grabs as there aren’t any clear favourites. But then again, Poland’s Marcin Krukowski and London Olympics champ Keshorn Walcott of Trinidad and Tobago have gone past 89m. Grenada’s Anderson Peters, the reigning world champion, is another one to watch out for.

Chopra, truth be told, is more of a dark horse. At the recent Kuortane Grand Prix in Finland, Chopra was third with 86.79m. Vetter and Walcott were also present there. For Chopra, it was after nearly two years that he was facing such top-class competition, the kind you find at the Olympics. Vetter won gold in 93.59m and Walcott was second with his season’s best of 89.12m.

“The performance in Finland was not my best, and there were technical issues, the height of the javelin was an issue. My javelin could not reach the venue that day as it got stuck in Stockholm, and I could not use it. So I had to use someone else’s,” Chopra had said. After the Finland result, Chopra has worked to fine-tune a release glitch — to not throw the javelin too high, just at the right angle. Overcoming it can help get a podium finish in Tokyo.

Shivpal Singh would be the other Indian in the javelin field. Unfortunately, his form doesn’t does not look good for a medal. Singh’s decline set in much before his 77.31m in the inter-state meet in June and a place in final seems a distant dream. He had qualified for Tokyo through an 85.47m effort in Potchefstroom in 2020. His silver-winning best (86.23m) was at the Asian Championships in Doha in 2019.

In the women’s category, Annu Rani, only the second Indian woman javelin thrower to qualify for the Olympics, made it to Tokyo via the world rankings quota. The 28-year-old’s personal best is 63.24m, the Indian national record set in March this year. That placed her 14th in the world going this 2021 season.

26 athletes will represent India in Tokyo, down from 34 at 2016 Rio. Realistically speaking, India’s only hope of winning a medal rests on javelin thrower Neeraj Chopra.

Athletes from North America and the Caribbean tend to dominate short-distance races, while middle and long-distance events are usually the preserve of African athletes. USA have won 334 gold. No other country has won even 100. At Rio 2016, USA won 32 medals, including 12 gold. Jamaica have become a strong force over the last few years.

Sumit Nagal would be the sole male player for India in Tokyo, while the women’s doubles pair of Sania Mirza & Ankita Raina will figure in women’s doubles.

Novak Djokovic of Serbia is a clear favourite, with the strongest challenge likely to come from Greek Stefanos Tsitsipas.

Sharath & Sathiyan’s event starts on July 24, final is on July 30

Manika & Sutirtha’s event starts on July 24, final is on July 29

Barely two days before the Tokyo Olympics open, India’s 10m air rifle shooters had to make do with just 20 minutes of training at the Asaka Shooting Range due to an issue arising out of distribution of time slots. While the other Indian shooters trained for more than two hours, the rifle teams, who have events lined up on the first competition day, saw their practice sessions reduced to less than half-an-hour. “This was due to some issue over time slots as athletes from all competing nations train at the same venue,” a National Rifle Association of India official said. “Today the training took place for about 2-2.5 hours in the morning session. The 10m air rifle teams got it for 20-30 minutes.”

With the boxing venue “quite far”, Indian pugilists have decided to train at the facilities available at the Games Village to avoid exertion and the risk posed by Covid-19. The boxing competition is scheduled to be held in Sumida ward’s Ryogoku Kokugikan arena, primarily a sumo wrestling venue. The arena is over 20km from the Games village.

Sweden stun US 3-0 in women’s soccer

Stina Blackstenius scored a pair of goals and Sweden once again stunned the United States at the Olympics with a 3-0 victory today in the women’s soccer tournament.

The Americans, ranked No. 1 in the world and the favorites to win gold in Tokyo, were riding a 44-match unbeaten streak heading into the match. In Rifu, Brazil’s Marta became the first player to score in five straight Olympics as the Brazilians beat China 5-0. Meanwhile, Great Britain triumphed over Chile in 2-0 win.

Six Poland swimmers flew back to Warsaw from Tokyo on Sunday with their Olympics dreams in tatters.

The unfortunate group -- all relay swimmers -- had only just arrived in Tokyo as part of the 23-strong Polish contingent when they received news of an error by the Polish Swimming Federation in the qualification submission process. An administrative mistake meant that Poland had infringed Olympics rules by overfilling their roster of permitted athletes, so a decision had to be made on who to send home. Agencies

The ability of Indian tennis to manufacture controversies never ceases to amaze. Bitter feuds among players and their general dislike and contempt for their federation officials have been a constant for years. This time around, there is yet another row, between Rohan Bopanna and the officials. Leander Paes, with his bronze in singles in 1996, had ended India’s 16-year wait for an Olympics medal. Thereafter the focus moved to doubles — Paes and Mahesh Bhupathi represented India’s best hope for a medal in three Olympics from 2000, but they failed. They played with different partners thereafter, but without change of luck. At Tokyo, it would be safe to rule out our man in the men’s singles, Sumit Nagal, for the field is very strong. This time there’s no men’s doubles team, and India’s hope, faint as it is, lies in the women’s doubles, in which 34-year-old Sania Mirza will partner Ankita Raina. At Wimbledon this year, Sania had reached the second round in women’s doubles (with Bethanie Mattek-Sands) and third round in mixed doubles (with Bopanna). 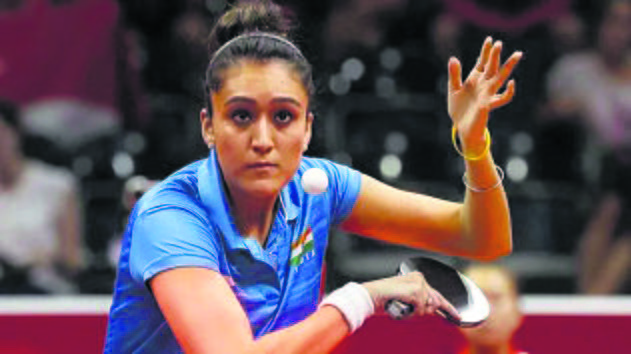 Confident at the tables

The Chinese rule the tables at the Olympics TT, having dominated the sport at the quadrennial event since it was included in the Olympics programme in 1988. India star Achanta Sharath Kamal has been around forever — in his 40th year, he’s ready for his fourth Olympics. He’s observed the Chinese domination from up close, and he is aware that snatching a medal from them is well near impossible. Currently ranked No. 32 in the world, Kamal, however, is brimming with hope. This is going to be his last Olympics and he wants to leave a mark in Tokyo. “I remember Athens 2004, I didn’t know how to prepare at all. 2008 Beijing I slowly understood what was required at that level and 2016 I prepared really well but didn’t get the results unfortunately, also I was coming from an injury (hip),” he says. “This time I feel I have gotten better as a player and my rankings reflect that.” However, his best chance of a medal remains in the mixed doubles with Manika (in pic) Batra. The second Indian in men’s singles, world No. 37 G Sathiyan, is confident, too — he beat Japanese world No. 4 two years ago and produced a historic medal-winning performance against Japan at the Asian Games. Having played the local league in Japan, he is brimming with optimism for his first Olympics.