Spain’s ouster shows traditional tiki-taka is decaying and is in dire need of revamp : The Tribune India 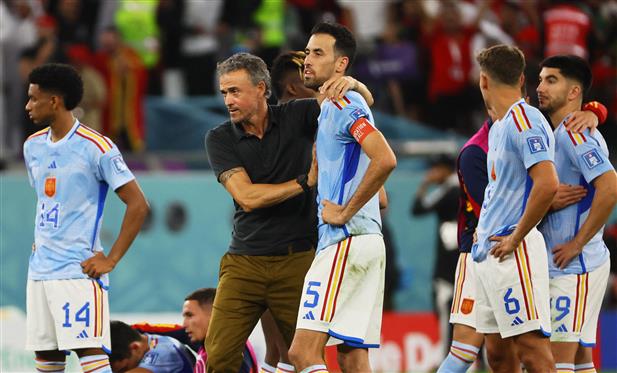 As the night deepened, the revelry following Morocco’s dream win over Spain spilled into the early hours. Moroccan flags replaced jerseys of Lionel Messi and Neymar in the shop displays around Doha.

What a World Cup it has been for Morocco. Their penalty shootout win over Spain and the wave of jubilation that spread like a wildfire across Morocco, Africa and the Arab world have become a part of football folklore.

Turn the page and what a forgettable one it has been for the Spaniards, with the echoes of 2018 ringing hard in their ears. If you thought it was a blessing in disguise to finish second in Group E, you were in for a surprise.

Before the World Cup began, Spain looked like they had all the ingredients to go all the way. Hope turned into belief when they overwhelmed Costa Rica 7-0 with their signature passing game fabled as ‘tika-taka’ — the art that won them the 2010 World Cup. Their graph, however, fell sharply as they drew 1-1 against Germany, lost 1-2 to Japan and were eventually shown the door by Morocco.

What really did go wrong for them? Well, the blueprint of all their matches was same — press, retrieve, pass, receive and pass. Spain completed over 3,000 passes in four matches, but they lacked verticality. You can have all the possession you want, it’s what you do with it that ultimately counts.

The build-up play from the back was elaborate as ever but by the time the ball got into the attacking third, teams like Japan and Morocco, who defended impeccably, forced Spain sideways. The congestion in the attacking third didn’t allow Spain any space to play through the central channels. When they tried to force the issue and lost the ball, they were hit on the break. This happened against Japan, whose suffocating press forced Spain custodian Unai Simon into making the error that led to the equaliser. Morocco also constantly troubled Spain with their counterattacks. Spain could muster only one attempt on target despite a 68 per cent possession.

Here, the need for an outlet is born — a player capable of churning something significant out of the chain of passes. For Barcelona, it was Lionel Messi. For Spain, it was the trio of David Villa, Xavi Hernandez and Andres Iniesta. A possession-based team has one or two players who provide a direct route.

Since the ignominy of 2018, coach Luis Enrique ushered in new blood to reignite the magic but Spain clearly lacked the cutting edge in Qatar. One could point towards Pedri and Gavi as the replacement for the Xavi-Iniesta combo, but those are big shoes to fill.

Up front, Enrique did shed the ‘false 9’ mindset by playing Alvaro Morata periodically and it paid dividends too, but the clinical nature of Villa has gone unmatched since 2010. Enrique, though, tried to mould tiki-taka rather than forsaking it. You could see glimpses of the team trying a more direct approach. Morata’s flick to open the scoring against Germany was a prime example. It took only four passes and the striker’s instincts to sniff a chance and pounce on it. But as they say old habits die hard, Spain have leaned on the monotonous routine of passing without purpose for long now and have paid the price — they have won only three of their 11 World Cup matches since the 2010 triumph.

Doha: Luis Enrique was replaced by Luis de la Fuente as Spain’s coach, two days after the national team was eliminated in the Round of 16. The 61-year-old De la Fuente helped Spain's U-19 squad win the Euro 2015, and the U-21 team win Euro 2019. He also coached the Spain squad that won silver at the Tokyo Olympics. agencies