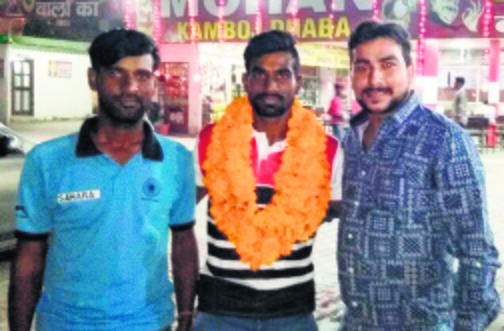 For Sumit Kumar (24), forward player in the hockey team that won a historic Olympic bronze today, the road to Tokyo was extremely tough and full of hardships in early days.

Hailing from Kurad village in Sonepat district, Sumit was born to a landless Dalit family that couldn’t even afford two meals a day. His parents Pratap Singh and Darshna Devi worked as daily-wagers to feed their three sons, including Amit and Jai Singh who were elder to Sumit. “There were numerous nights when Sumit went to bed on an empty stomach. Sometimes, it would only be a piece of ‘roti’. Drinking milk was a luxury,” says Amit, his voice choking with emotions. After pursuing menial jobs in the Jat-dominated village, Sumit along with Amit started working at a food outlet—Mohan Kamboj Dhaba—on the NH-44 in Murthal when he was barely five. At times, the owner of the dhaba, where he worked for five years, would allow Sumit to take home the leftover food for his family.

Sumit completed his primary and middle education at HK Senior Secondary School in their village. It was at the school’s hockey academy that Sumit, at the age of eight years, got an opportunity to enrol in the sport. Seeing his passion for the game, the coach gave him a free stick and a pair of shoes. “After cleaning the floor early morning, Sumit would rush to the academy around 5 am. Whatever spare time he got, he would practise on the ground. The hard work and hardships only made him stronger; more dedicated towards the game,” recalls Amit.

Kurad village erupted in celebrations after India bagged the medal. The family and villagers now plan to accord a grand reception to their hero, whose achievement has catapulted a non-descript village onto the world stage.