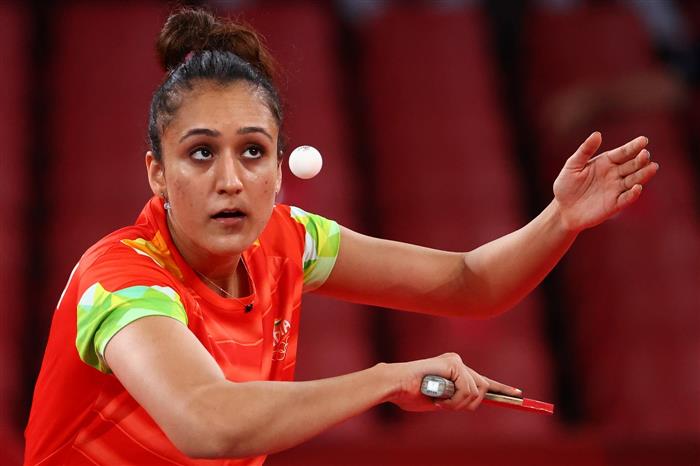 India's Manika Batra in action during a match at the 2020 Summer Olympics in Tokyo, Japan. Reuters

India’s table tennis star Manika Batra made a stunning comeback against world number 32 Margaryta Pesotska to reach the women’s singles third round but G Sathiyan succumbed to the pressure on his Olympic debut to exit the men’s singles competition here on Sunday.

While the 26th seed Sathian was expected to beat world number 94 Hong Kong’s Siu Hang Lam in his second round match after getting a first round bye, the same cannot be said about Manika, whose gritty approach under pressure proved decisive against her higher-ranked opponent from Ukraine.

She meets Austria’s Sofia Polcanova on Monday for a place in the round of 16. If Manika manages another upset, it will be a significant achievement for the Indian in her second Olympics.

Like her first round match, she did not want the national coach in her corner on Sunday but her personal coach Sanmay Paranjape was seen in the gallery.

However, the way she fought throughout the game, it showed she was supremely confident about her abilities and did not any need any court side support.

Down and out after the first two games and trailing even in the third, Manika somehow clawed her way back into the match.

She used the pimple rubber to good effect thereafter and combined it with a more offensive approach. The match saw long rallies, slow as well as fast ones, as Manika twiddled with her bat amazingly to find forehand and backhand winners.

The sixth game which she won after trailing 2-5 turned the tide in her favour decisively. The timeout worked as she reeled off nine points in a row to give herself five game points before levelling the match at 3-3.

With momentum in her side, Manika controlled the deciding game and sealed the match with a forehand cross court winner.

Earlier, world number 38 Sathiyan had a commanding 3-1 lead but lost four games in a row to lose 3-4 to lower-ranked Lam from Hong Kong.

“It is heartbreaking but I will come back stronger. I was playing really well initially. I was aggressive and serving well but  after the fourth game he started to slow down the pace and started receiving better,” Sathian told PTI.

“The rallies got longer and I started to feel the pressure. I was a little bit passive from the fifth game onwards. I should have continued being aggressive despite his variation in pace. I just made the error of playing it safe.

“Credit to him also. He did not make much mistakes in the last two games,” Sathiyan added.

The first game was tight but the Hong Kong player pulled away from 6-6 with his forehand at work.

Sathiyan switched gears after the opening game with ease. He not only put up a stout defence but levelled the match when Lam hit a return out on a ferocious forehand.

Sathiyan raced to a 5-1 lead in the third game in a dominating fashion and kept going strong as Lam’s game fell apart and in no time and Sathiyan had a 2-1 lead in his pocket.

But there was a twist in the tale with Lam drawing parity by taking the next two games. Sathiyan saved two game points in the sixth game to keep Lam under pressure but made an error on third game point.

In the deciding game, Lam opened up a 5-2 lead with crushing forehand winner after a time out.

Lam completed the upset win when Sathiyan made a backhand error.

For someone who thrives on fast and long rallies, Sathiyan felt he was not aggressive enough after taking a 3-1 lead in the match while his opponent raising his game. PTI