Due to technical glitch, Manu was left to shoot 44 shots in 55 minutes 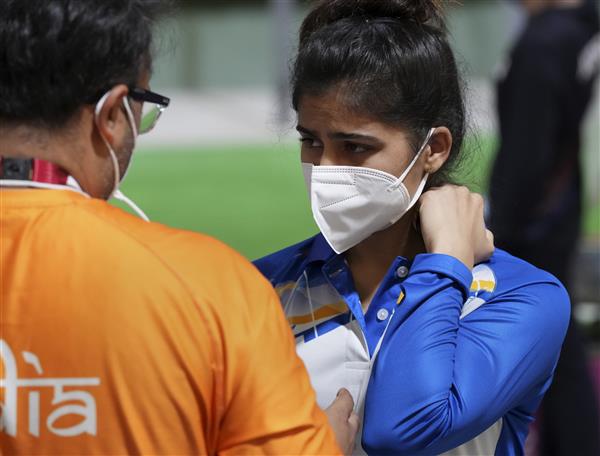 A major malfunction in her pistol cost Indian shooting ace Manu Bhaker dearly as she lost nearly 20 minutes during her qualifications, leading to a heartbreaking exit from the women’s 10m air pistol event at the Tokyo Olympics here on Sunday.

When the technical snag—the pistol’s cocking lever broke down—happened, she was left to shoot 44 shots in 55 minutes.

When she came back to the firing point after getting the issue sorted, Manu had to complete the remaining number of shots in 36 minutes, an improbable task in any level of competition.

Once she had returned to the range, more agony awaited the 19-year-old as 4-5 minutes were lost in checking the repaired gun in the sighter (practice).

“Normally, it doesn’t take more than a few seconds and we couldn’t have claimed more time, so I had to tell Manu to start shooting as we had already lost a lot of time,” pistol coach Ronak Pandit told PTI.

Manu, along with her coach and a member of the jury, had to go to a designated area to get her pistol checked and repaired, as no repairing is allowed near the range because of safety concerns.

“Fifty-five minutes were remaining for 44 shots when the malfunction took place and when she came back after getting it sorted (the cocking lever was replaced), which we got in a record time, she was left to shoot 44 shots in 36 minutes,” Ronak, a former India shooter, said.

Needless to say, the unfortunate incident has left the young shooter “heartbroken”.

She had suffered due to technical issues in the past too, most notably during the ISSF World Cup in Munich in 2019, which offered quota places for the Tokyo Games. But, she came back strongly to grab the quota in another event of the same tournament.

“But, even with all the problems that she has faced today, an inner 10 in the last series would have taken her in the finals,” the coach added.

The duration of time lost was more than enough to disturb her rhythm, after she had made an impressive start in her maiden Olympic appearance.

Earlier in the day, her father Ramkishan Bhaker as well as a National Rifle Association of India (NRAI) official, had said that the electronic trigger of Manu’s pistol had “suffered a circuit malfunction” in the middle of the second series of the qualification.

Manu returned to the firing point after getting the issue fixed but, by then, it has disturbed her momentum as she went up again, against a world-class filed comprising Olympic and world champions.

Ranked number two in the world, Manu was pegged back by the “double blow” after a start that saw her take one of the places in the top eight.

With a 98, the Commonwealth Games and Youth Olympics gold medallist tried to stage a comeback in the fifth series, but one 8 and three 9s in the sixth and final series left Frenchwoman Celine Goberville to bag the eighth and last qualifying spot.

Manu recovered extremely well to shoot 98 in the 5th series but the time lost due to the technical snag took a toll on her.

Pistol shooter Heena Sidhu, who has represented India in two Olympics besides being a former world champion and world record holder, explained in detail the problems faced by her compatriot while slamming those who held the view that Manu buckled under pressure.

“For all d people who are quick to judge that Manu succumbed to pressure. I just got to know what happened to her equipment in detail n how much time she lost. She didn’t succumb to pressure she rose to it,” Heena, who is married to Ronak, tweeted.

Manu finished 12th in the event with a total score of 575 while Yashaswini Singh Deswal managed to be placed 13th with 574. The cut-off was 577. Both the Indians were appearing in their maiden Olympics.

In another tweet, Heena wrote, “She was so close that if that last shot was an inner 10 she wud have been in the finals even after going through a complete weapon breakdown in between the match.

“Stop judging athletes on numbers coz maybe that’s the only thing u can understand. Start understanding Performance!!”

Lauding the two India shooters for their effort, Heena said, “Manu and Deswal rank 12, 13 with 575 and 574. I think they put up a brave brave fight especially Manu, after having some problem with her equipment.

“I think this experience will make them stronger for the mixed team event which I’m really looking forward to now.” PTI