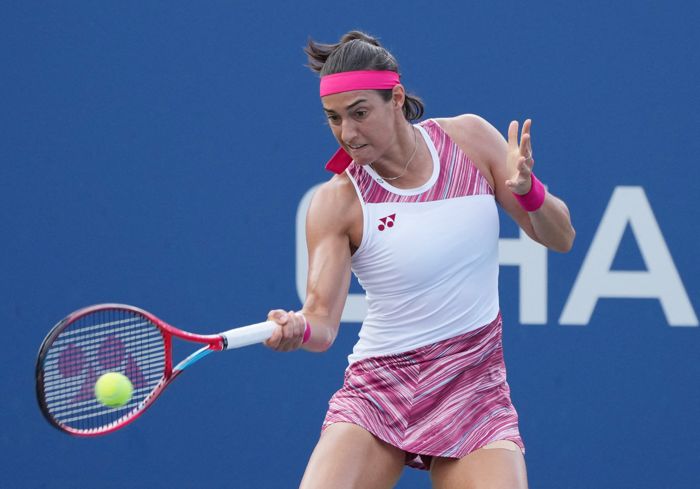 Last year’s semifinalist Maria Sakkari took on a familiar Grand Slam foe in her US opener. She had already played Tatjana Maria in two of the year’s Majors, and both previous matches promised a tight contest today. Sakkari had edged Maria 6-4 7-6(2) in the first round of the Australian Open, the German’s first tour-level match since returning from her second maternity leave last August. In the third round of Wimbledon, it was Maria’s turn to win 6-3 7-5 en route to a first-time Grand Slam semifinal at the age of 34.

Their rematch was nip-and-tuck for much of its duration. Slow to get to grips with Maria’s slice, Sakkari fell behind 1-4, but reeled off five straight games to take the first set. But the Greek fell behind in the next set. Some stellar serving from Maria, who conceded only six points on her serve in the second set, saw the German level the match. In the decider, though, Sakkari got to grips with Maria’s wiles by countering them with her own. She headed to net when she got the chance to win the match 6-4 3-6 6-0.

Earlier, France’s Caroline Garcia opened her campaign with a 6-2 6-4 victory over lucky loser Kamilla Rakhimova. Coming into the US Open having won the Cincinnati Masters, Garcia was too strong for Rakhimova.

Andy Murray powered into the second round with a comfortable 7-5 6-3 6-3 win over Argentine Francisco Cerundolo, as the former world No. 1 rolled back the years at the scene of his first Grand Slam triumph a decade ago.

The 35-year-old Scot, who has battled various injuries in recent years, raced to a 5-2 lead early in the match but dropped his level slightly before edging a tight first set and breaking quickly in the next to put 24th seed Cerundolo under pressure.

Murray staved off a comeback attempt by Cerundolo to take the second set for a commanding lead and showed little signs of stepping off the gas pedal, as his opponent continued to make life difficult for himself with unforced errors. A double break in the third set allowed twice Wimbledon champion Murray to surge ahead 4-1 and he sealed the win when Cerundolo sent a return long.

In one breath, Nick Kyrgios talks about heading into the US Open with as much self-belief and good play as ever, coming off a runner-up finish at Wimbledon and some strong results on hardcourts in recent weeks. In the next, ever an enigma, the 23rd-seeded Kyrgios says he can’t wait for his stay in the Flushing Meadows bracket to be over — perhaps as soon as Monday night, when he faces his “good mate,” fellow Australian and doubles partner Thanasi Kokkinakis — so he can head back home to the other side of the world. — Agencies