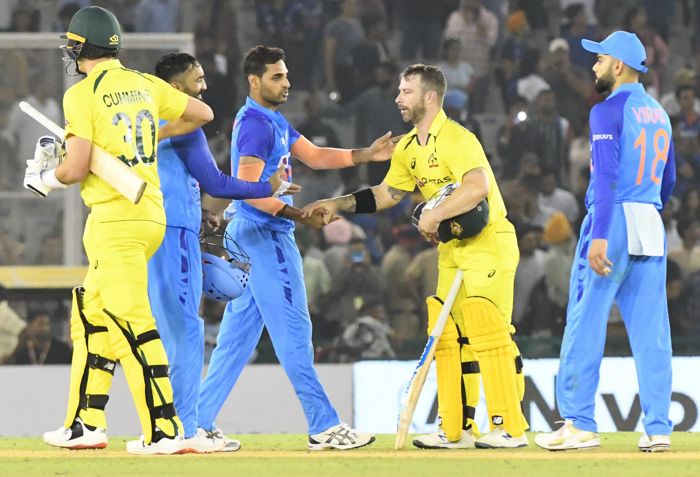 Australia's Matthew Wade is greeted by Bhuvneshwar Kumar after the match as Virat Kohli looks on. Vicky Gharu

In a pre-match press conference, India captain Rohit Sharma had spoken about how he wanted the team to play fearlessly.

He could not have asked for more from his batters, who attacked from the get-go as vice-captain and opener KL Rahul shot back at his critics with a 35-ball 55. They did not slow down even after losing two of their most experienced batters — Sharma and Virat Kohli — within the first five overs.

Suryakumar Yadav carried on with the big-hitting with four sixes in his 46 off 25 balls. As the team seemed to lose momentum during the second part of the innings, Hardik Pandya provided the final flourish with a 71 off 30 balls. He hit seven fours and five sixes, which included three big hits off the final three balls of the innings, to get India to 208/6.

However, when it came to defending the target, Sharma’s bowlers and fielders — India dropped at least three chances — again let him down. It was a repeat of the Asia Cup. India had made an early exit after failing to defend 181 against Pakistan and 173 against Sri Lanka. Having crossed 200 this time, the loss would have pinched Sharma more. “I don’t think we bowled that well,” Sharma said. “200 is a good score to defend and at the same time we didn’t take our chances on the field. That’s about it. I think we batted brilliantly to get to that score,” he added.

Bowling off the mark

India used six bowlers, and five of them went for more than 11 runs per over. Bhuvneshwar Kumar ended up conceding 52 runs for no wicket, while Harshal Patel leaked 49 runs. India sorely felt the absence of Jasprit Bumrah. His replacement, Umesh Yadav, also bore the brunt of Australia’s relentless attacking, conceding 27 runs in two overs. He, however, almost turned the tide in India’s favour by dismissing two crucial batters — Steve Smith and Glenn Maxwell — in one over.

The sole exception was Axar Patel, who gave away just 17 runs in the four overs and took three crucial wickets, including the dismissals of Australian captain Aaron Finch and top-scorer Cameron Green.

Green, who opened the innings for the first time, was the star for Australia. The young all-rounder did the damage at the top with a 30-ball 61, smashing eight fours and four sixes. When the visitors looked to have stumbled after the two quick dismissals, it was the experienced wicketkeeper-batter Matthew Wade who punished the Indian bowlers at the death to take Australia across the line. Wade’s 21-ball 45, with six fours and two fours, did the trick for Australia, who were 145/5 at one point.

After conceding their highest total against India in a T20I, Australia chased down the target with four balls to spare, finishing with 211/6. It is Australia’s second-highest successful T20I chase. “At this ground it didn’t worry us too much. Anywhere between 12 and 14 an over at the back end on a wicket like this and an outfield like this we back ourselves to get them,” Wade said.

Need to look at our bowling: Rohit

I don’t think we bowled well. 200 is a good score to defend, and we didn’t take our chances in the field. It was a great effort from our batters, but bowlers were quite not there. You can’t score 200 everyday, you need to bat well. Hardik (Pandya) batted really well to get us there. We need to look at our bowling before the next game. There are things we need to look at, but it was a great game for us to understand what went wrong. — Rohit Sharma, India skipper

Got thrown in the deep end: Green

Kind of got thrown in the deep end a little bit but it was nice to bat with Finchy. He is an experienced campaigner and keeps you calm in the middle. It was kind of nice. — Cameron Green, player of the match

We had some really good partnerships, there were some good contests between the bat and ball. They came hard at us. You expect the run-rate to slow down if you lose wickets. I thought the intent of all our guys, the way that they just attacked their match-ups and really took it on and tried to change the momentum of the game was really good. That’s what we play for, we still try to instil all the processes leading into the World Cup. Rohit Sharma, India skipper