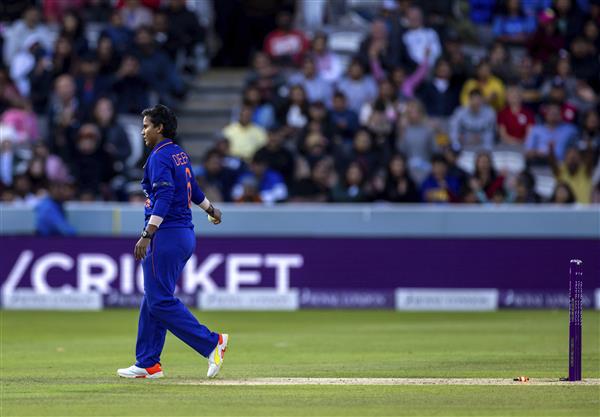 India all-rounder Deepti Sharma today said that Charlie Dean was warned against backing up too far multiple times before she effected a controversial run out of the England batter in their third and final ODI.

The dismissal reignited an intense debate over the spirit of the game.

“We had planned this as she was not paying heed to our repeated warnings. We acted according to the rules and the guidelines,” Sharma told reporters upon her arrival here.

Reduced to 118/9 in their pursuit of 170 in the third ODI, England’s chase was led by their No. 9 batter Dean, who revived their hopes with her last wicket partnership with Freya Davies. With 17 needed to win, Dean was run out for 47 as the veteran Indian off-spinner decided to clip the bails, giving India a 3-0 series sweep.

The run-out is currently listed in the ‘Unfair Play’ section of the laws but is set to be moved to the ‘Run Out’ section at the start of next month when an update in the ICC Playing Conditions comes into effect.

Sharma further pointed out that they had informed the umpires before running out Dean. “We did inform the umpires, but she continued to do it. There was nothing we could do,” she added.

However, England skipper Heather Knight, who is currently recovering from a hip surgery, has accused India of “lying” about warnings.

Knight dismissed the claims made by Sharma in a series of tweets.

“The game is over. Charlie was dismissed legitimately, India were deserved winners of the match and the series. But no warnings were given,” Knight wrote on Twitter.

“They don’t need to be given, so it hasn’t made the dismissal any less legitimate. But if they’re comfortable with the decision, India shouldn’t feel the need to justify it by lying about warnings,” she added. — PTI

New Delhi: India wicketkeeper-batter Taniya Bhatia today claimed she was robbed of her important belongings, including cash, cards and jewellery, in London. “Shocked and disappointed at Marriot Hotel London Maida Vale management; someone walked into my personal room and stole my bag with cash, cards, watches and jewellery during my recent stay as a part of Indian Women’s Cricket team. So unsafe,” Bhatia tweeted.