We could have done better but Indians kept us under pressure: Labuschagne 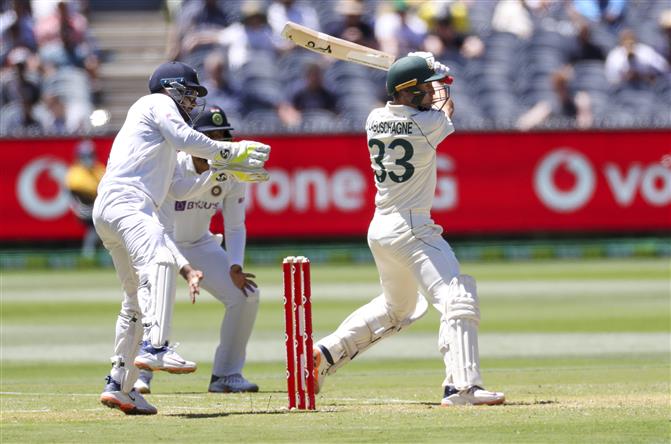 Australia’s Marnus Labuschagne bats during play on day one of the Boxing Day Test. AP/PTI

Australia batsman Marnus Labuschagne lauded Indian bowlers for coming up with “new ideas” in the second Test that started here on Saturday, acknowledging that his side felt under pressure during its rather disappointing first essay.

Australia were bowled out for 195 on the opening day of the Test with pacer Jasprit Bumrah and off-spinner R Ashwin sharing seven wickets between them. At stumps, India were 36/1.

“Certainly, we could have done better. We probably had three dismissals we did not probably need to,” Labuschagne, who top-scored with a 48 from 132 balls, said at a virtual press conference facilitated by official broadcasters Sony after the day’s play.

“They (Indians) were bowling straight and (we are) not getting many runs on the off-side. Bowlers come up with new ideas to stop scoring, built pressure as they did today,” he added.

“I faced 130 balls (or) something (like that). That is the challenge we face as a batting group and we love it.”

The 22-year-old right-handed batsman said his side would learn from its first innings performance and try to score big in the second essay.

“It is not necessary that six batsmen (get run) every innings, sometimes it is one or two.

“It is a big job for the batting unit whoever is in the day, it may be myself or anyone else in the top order, he will have to ensure big scores.”

Asked about the Australians’ battle with Ashwin, he said, “People are coming up with new ways like leg side field, bowled straight.

“(We) are just understanding and learning what he is doing. That is the key. We always do that as a batting group and keep better from learning.”

He said the MCG pitch is helping the bowlers a little bit more than usual.

“During the game, we certainly had a chat. Teams have very good bowling line-ups and there was a little bit more in it (pitch).

“There was more seam and little bit more swing today which was something (that was) probably not seen usually at the MCG. We have to adapt and make sure that we score big in the second innings.”

Asked about the review India took against him in the 16th over after Bumrah’s LBW claim was shot down by the umpire, Labuschagne said, “There was the technology, I am not sure (the exact thing). Lucky enough to get away with it.”

On his impression of debutant India pacer Mohammed Siraj, he said, “He is more of a swing bowler than a seam bowler. He is nearly six feet, swings away from lefties.

“He certainly has skills. We have to make sure we understand what they are trying to do and come back strong.”

He also said he was not affected by a hit on his helmet as he was “accustomed to it” and just “had to shake it off”. — PTI