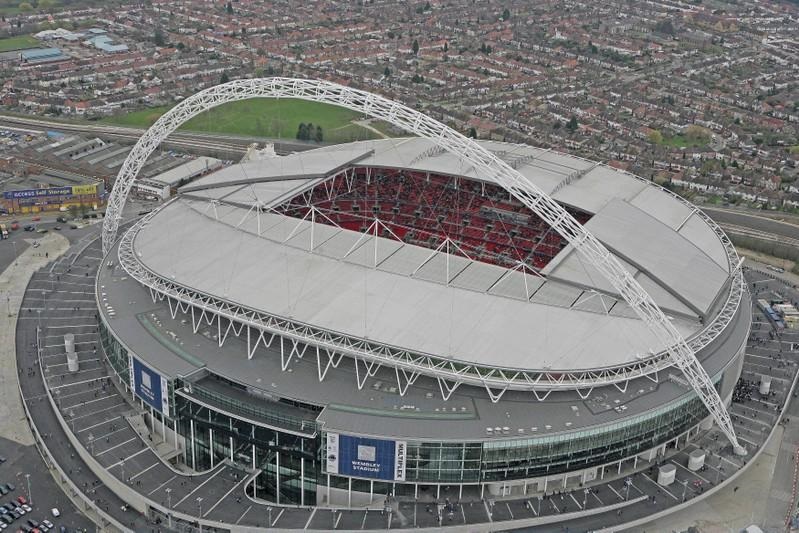 As the 90,000-capacity Wembley held its first game without fans, the financial impact of the pandemic on English soccer was revealed by the national stadium's owners.

The English Football Association announced plans to cut 82 jobs to cover an anticipated £300 million ($370 million) deficit due to the coronavirus pandemic restricting crowds at games and more events being canceled.

Social distancing at stadiums meant Northampton players had to pick up the medals and trophy themselves — rather than from dignitaries — after beating Exeter in the League Two playoff final at Wembley to win promotion to the third tier.

It was the first time a game was played without fans since the rebuilt Wembley opened in 2007. The loss of revenue will also be felt when the FA Cup semifinals and final are staged at an empty Wembley in the coming weeks.

Wembley was due to stage seven games at the European Championship including the semifinals and finals next month but the tournament was postponed by a year.

Other events, including concerts and two NFL regular season games, have also been called off.

“We have already lost that money and there is no way we can recover it,” FA chairman Greg Clarke said on Monday.

“The pandemic will be followed by an economic recession, so there will be problems that last for years."

According to the British government tally, there have been more than 43,500 coronavirus-related deaths since March. While sport has resumed this month, supporters are not allowed in stadiums as part of efforts to contain COVID-19.

"So we have to plan for extended periods of social distancing which could limit crowds ... and could limit the number of competitions to be played.”

Hospitality revenue, which can generate £35 million a year at Wembley, has “completely fallen away and will probably take years to recover," the FA said.

Compensation has also had to be paid for some of the canceled events, while the FA has been unable to fulfil some commitments to sponsors and broadcasters.

When Britain went into lockdown in March, the FA halted recruitment and 42 vacant positions will not be filled. Another 82 roles are being removed from the not-for-profit governing body.

“That means we have set out in our proposals some difficult choices because we do not think we can afford to do all the things that we did before,” he said. — AP