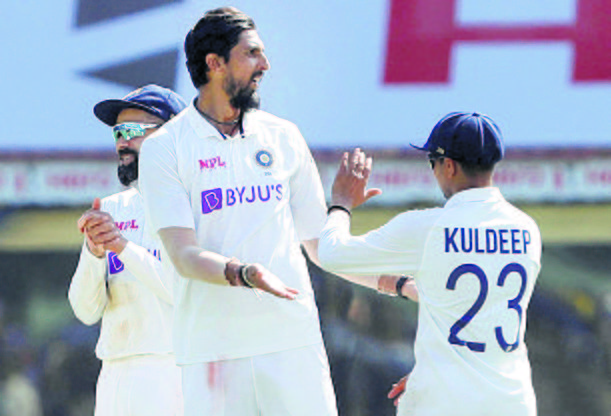 Helping India to win the inaugural World Test Championship (WTC) would be as momentous as a World Cup victory for fast bowler Ishant Sharma, who is set to play his 100th Test against England from Wednesday.

I only play one format, so the WTC is like a World Cup for me. If we reach the final and then go on to win it, it will be the same feeling as winning the ICC World Cup

In a career spanning 14 years, the 32-year-old from Delhi has taken over 300 wickets in the longest format of the game but the last time he played white-ball cricket for India was over five years ago.

Only Kapil Dev, with 131 matches, has played more Tests than Ishant for India as a fast bowler.

“There’s a lot of time for 131,” Ishant told reporters today. “Right now I am only thinking about how we can win the next Test. And then the next so that we can qualify for the final of World Test Championship.”

“I only play one format, so the WTC is like a World Cup for me. If we reach the final and then go on to win it, it will be the same feeling as winning the ICC World Cup,” he added.

The ICC launched the WTC last year to lend context to bilateral Test series, giving Test cricket its standalone showpiece like the World Cup in other formats. New Zealand have booked their spot in this year’s final at Lord’s and India can join them with a win and a draw against England in their ongoing four-Test series which is currently level at 1-1.

Ishant has learned not to worry about things he cannot control. “I’d have loved to go to Australia and complete my 100 Tests there but there are things that are not in your control,” said Ishant, who was injured ahead of the trip Down Under before the mandatory 14-day coronavirus isolation regulations ruled him out.

“The sooner you forget things and move on in life, the better it is for you. This is the biggest lesson I have learned,” he added.

England’s James Anderson also plays only Tests and is still leading their attack at the age of 38.

“Thirty-eight is difficult to say as of now,” Ishant said. “I just go one Test at a time. I understand my body, what kind of training I need to do. I am looking after myself.” — Agencies

Ahmedabad: Pacer Umesh Yadav was today added to India’s squad for the last two Tests against England after he passed a fitness test, while Shardul Thakur was released to compete in the ongoing Vijay Hazare Trophy. Yadav had suffered a calf injury against Australia in December. There is a possibility that India might play three pacers in the third Test. PTI