WTA Finals, contested by the world’s top eight singles players and eight doubles teams, were moved to Guadalajara from Shenzhen this week due to the Covid-19 pandemic and will begin on November 8 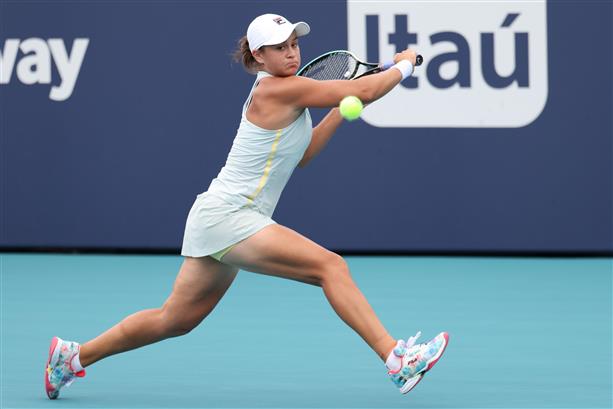 World number one Ash Barty might not defend her title at the season-ending WTA Finals in Mexico because of the “ridiculous” playing conditions at the venue and the timing of the tournament, her coach Craig Tyzzer said.

The WTA Finals, contested by the world’s top eight singles players and eight doubles teams, were moved to Guadalajara from Shenzhen this week due to the Covid-19 pandemic and will begin on Nov. 8.

Tyzzer said Barty, who won the 2019 WTA Finals before the 2020 edition was cancelled, might also compromise her 2022 Australian Open preparation if she plays in Mexico as she would have to undergo two weeks of home quarantine on her return to Australia.

“We only just found out it’s in Mexico at 1500 metres (above sea level) and they’re using pressure-less balls,” Tyzzer told the Australian Associated Press on Wednesday.

“Pressure-less balls absolutely fly. It’s a ball that, if you use it in normal conditions, it doesn’t bounce. It’s not the greatest advertisement for the best girls in the world to be playing something they’ve never done before.

“In conditions they’ve never played, in a country they don’t play and at altitude, I just feel it’s ridiculous. As a spectacle, it’s just frightening.” Barty, who suffered a third-round exit at this month’s US Open, is “physically and mentally exhausted”, said Tyzzer.

“Indian Wells (next month) is still on the radar but she just needs a rest,” he added. “So I told her to just get away and have a holiday.

“It certainly isn’t easy for us to get there and to play that event in Mexico and then to come back and have to do two (more) weeks (in quarantine) and then your summer is sort of ruined as well.

“It’s a decision we’ll have to sit and mull over quite a bit.” Reuters