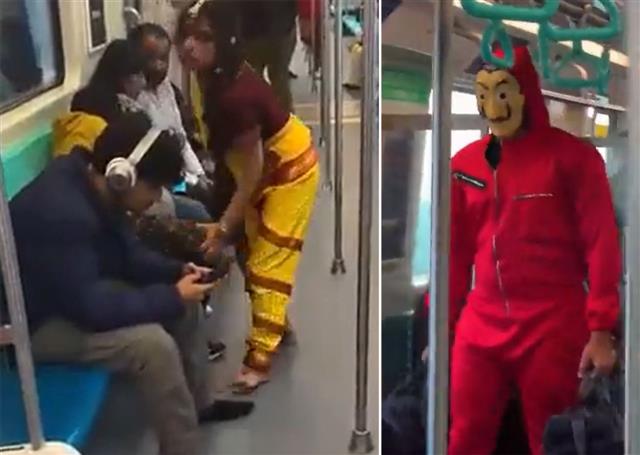 A video of a young girl in a dishevelled appearance chasing a passenger inside the Noida-Greater Noida metro which has surfaced online and triggered speculations among social media users is an edited footage of a commercial advertisement, officials said Tuesday.

The purported video showed the young girl dressed up as the character of ‘Manjulika’ from popular comedy-horror film ‘Bhool Bhualiyaa’. The girl was seen chasing a particular passenger on board the metro’s Aqua Line and engaging other commuters as well with her “scary” tactics, according to the video.

A man dressed up as a character from popular web series “Money Heist” on board the metro also showed up in a separate video, triggering speculations about safety concerns among some while others thought these were social media content creators making “reels”.

However, the Noida Metro Rail Corporation (NMRC), which operates the Aqua Line between the twin cities in Gautam Buddh Nagar, confirmed Tuesday evening that these videos were part of a commercial advertisement shot on the metro premises with its permission.

“This is to clarify that video going viral on various social media platforms is a part of a commercial advertisement shooting which was held on December 22, 2022, under approved NMRC Policy for Film Shooting. Also, this video clip is morphed and edited,” NMRC Managing Director Ritu Maheshwari said.

The advertisement was for audio and wearables brand boAt, she said.

"The NMRC has approved Film Shooting Policy where it provides its infrastructure, including rolling stock on rental basis to earn non-fare box revenue. Ad film shooting was carried out by M/s Creative Productions (A Delhi-based film production house) for 'boAt air dopes' on the NMRC corridor," Maheshwari said.