The video has been shared by official Twitter handle of CISF 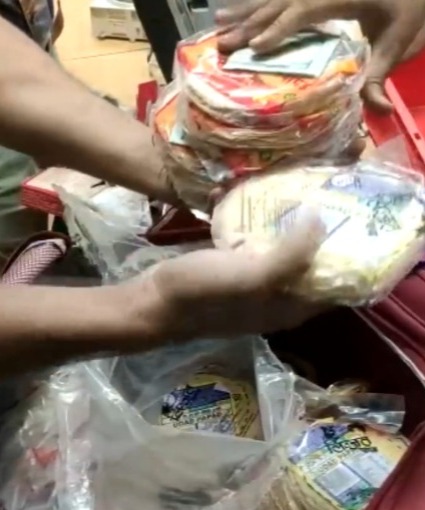 The man was offloaded from his Air Vistara flight and handed over to the Customs authorities by the CISF personnel. Video grab- Twitter/@CISFHQrs

CISF on Tuesday nabbed a man from IGI Airport for allegedly carrying US dollars worth over Rs 15 lakh stashed in packets of crunchy ‘papad’.

The video has been shared by official Twitter handle of CISF.

#CISF nabbed a passenger carrying foreign currency worth approximately INR 15.5 lakh concealed inside Spice boxes and in between papad packets @ IGI Airport, Delhi. The passenger was handed over to Customs.

The passenger was intercepted around 5 am during security checks at the terminal-III of the airport.

A total of USD 19,900 was placed between layers of ‘papad’ packets placed one over the other. Besides, the currency was also concealed inside boxes marked as spices.

The man was offloaded from his Air Vistara flight and handed over to the Customs authorities by the CISF personnel.

He could not furnish a valid authorisation for carrying such a big amount of foreign currency, the officer said. With PTI inputs