Daler Mehndi falls for a spoof post that claims Prince Harry listened to his music during his ‘lowest moments’ : The Tribune India

As the famous Punjabi singer accepted a fake post as being genuine, this led to a lot of laughter among Twitter users 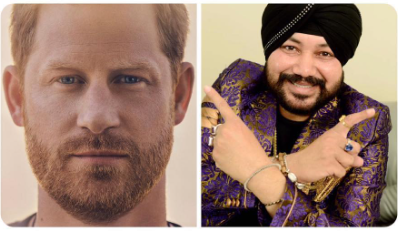 Famous Punjabi singer Daler Mehndi was recently fooled by a spoof post stating that Prince Harry of the British royal family mentioned him in his latest biography ‘Spare’. 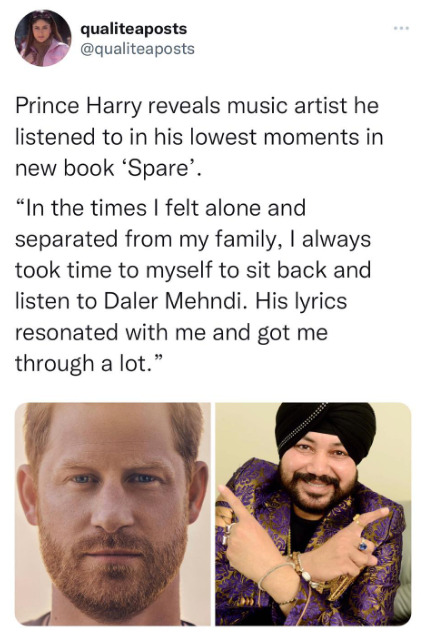 The post claimed that Prince Harry stated that he had turned to the Indian musician in his darkest hours. Users on Twitter were amused by Daler Mehendi's message because they could not believe Daler had accepted a fake post as being genuine. This led to a lot of laughter among Twitter users.

Originally published on Instagram by @qualiteaposts, the post said as follows: "Prince Harry reveals music artist he listened to in his lowest moments in new book 'Spare'. "In the times I felt alone and separated from my family, I always took time to myself to sit back and listen to Daler Mehndi. His lyrics resonated with me and got me through a lot."

Unaware of the post's satirical nature, Daler Mehndi uploaded a screenshot of it on Twitter with the caption, “I am grateful to the blessings of Guru Nanak, my parents, and my dad, I created a unique Pop Folk Ethnic Music Style. Love you Prince Harry! God Bless you, In gratitude that my music helped you. @TeamSussex".

I am grateful to the blessings of Guru Nanak, my mom and dad, I created a unique Pop Folk Ethnic Music Style.
Love you Prince Harry! God Bless you, In gratitude that my music helped you.@TeamSussex pic.twitter.com/r2mRU0mn6U

The Twitterverse was full of people who respond with gifs and memes of all degrees of hilarity. A fan tweeted, “Who gonna tell him,” while another said, "Oh Praaji ye to dhoka ho gya (O brother, you have been cheated)."

Check out some of the amusing responses:

who gonna tell him pic.twitter.com/dhrgUyKZ70

Prince Harry and the lads getting through difficult times…https://t.co/HS7hxSFd0r

I don’t think we should tell him. This is the cutest acceptance speech ever.