The video has been uploaded on YouTube, where the couple can be seen taking a ride on their newly bought vehicle 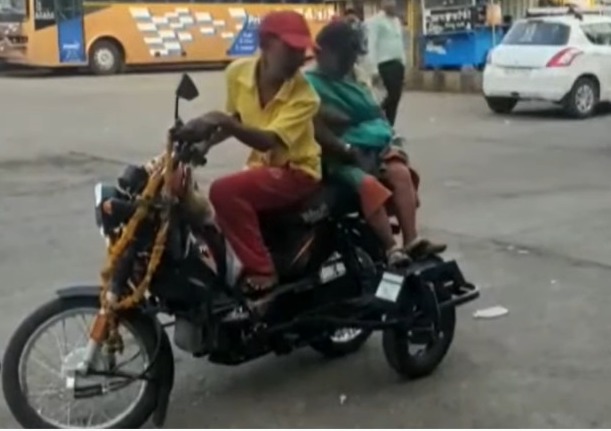 While talking to media, Sahu told it took him 4 years to save the money. Videograb

Love and care for their life partner can make people take big decisions, even if they are financially challenging. One such incident has been reported from MP’s Chhindwara, where a beggar has reportedly spent a whopping sum of Rs 90,000 to buy a motorcycle for his ailing wife.

The video has been uploaded on YouTube, where the couple can be seen taking a ride on their newly bought vehicle.

As per a report of The Indian Express, Munni has a persistent problem of backache and it becomes more severe when she rides on tricycle with her husband Santosh Sahu, who is differently abled. Sahu took the concern of his wife seriously and decided to flourish huge sum of Rs 90,000 to facilitate her wife while they go around begging.

The moped Sahu bought is cheap but requisite modifications to make it compatible for him, as he is differently abled with both his legs, plunged the cost.

While talking to media, Sahu told it took him 4 years to save the money.

As Sahu owned a manual driven tricycle earlier, his wife had to push it at times. She thus often would fall ill. Sahu, consequently, started saving money that couple earned from begging at bus stands, temples and mosques.