Engaged in playing video game on toilet seat, man got bitten on butt by snake 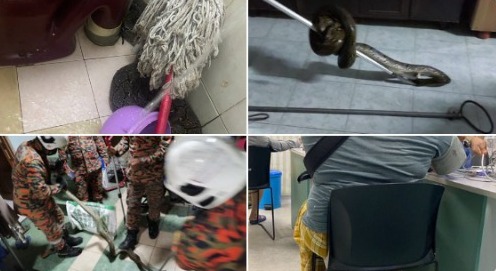 Following the incident, Tazali started using the toilet of an adjacent mosque till he got his toilet bowl changed. Pic credit- Twitter/@sabritazali

Being enormously involved in video games could be life threatening at times. While our senses get involved in games, we generally tend to forget the dangers we could be subjected to. One such incident has been reported from Malaysia, where a 28-year-old man got bitten by a snake on his butt while he was peeping into his phone in the toilet.

According to Malaysian newspaper The Star, Tazali has a habit of playing video games during the time he spends in loo. However one day, Tazali stood up from the toilet seat to discover that a snake had clinged to one of his buttocks. He instantly screamed and got the reptile separated from his body.

He immediately called rescue department and got the snake captured. In the meantime, he rushed to hospital and was delighted to find out that the snake was non venomous. He, however, got a tetanus dose as safety precaution to do away with any possibilities of infection.

Sabri has recently shared several photos of rescue department officials trapping the snake along with his visit to doctor.

Following the incident, Tazali started using the toilet of an adjacent mosque till he got his toilet bowl changed. While talking to a news portal, Tazali told though the incident is two-months old, he has not fully recovered from the shock.