From performing stunts on ‘Highway’ to apologising in ‘Lock up’: Watch how Noida man’s ‘Heropanti’ lands him in trouble

If you do stunts, we will hunt, say the UP police 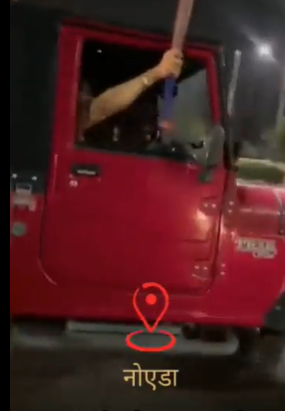 A video grab of a man performing stunts on the Noida road. Credit: @Uppolice/Twitter

People do all kinds of bizarre things to go viral on social media.

But it's not always that you are lucky to miss the eye of police.

In a latest post shared by the Uttar Pradesh police on Twitter, a man had to face the music for his ‘Dabangg’ stunts on the Noida roads.

In a video shared by the police, the man can be seen recklessly driving a Mahindra Thar while swinging a baseball bat outside the front window.

He can be seen throwing money out of the window and flexing his muscles.

The UP police wrote: “Karoge sadak pe stunt, to hum karenge hunt…gaadi hogi zapt, hoge hawalaat mei shunt. (If you perform stunts, we will hunt you down, seize your vehicle and shunt you in jail.)”

The man’s stunts landed him in trouble as in no time he was arrested and his vehicle impounded.

Not only this, the man also had to apologise for his action from the jail cell and promise not to repeat it.

The users lauded the swift action taken by the police.