The couple tie the knot after 2 decades of first meeting 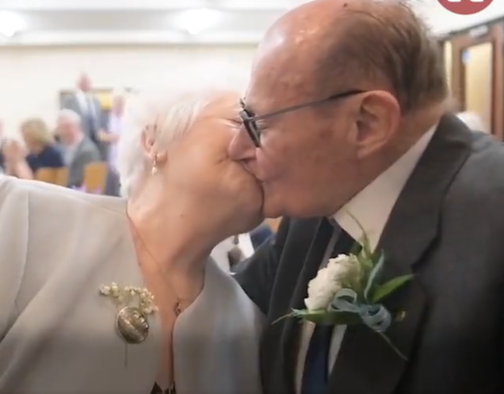 A video grab of the newlyweds. Source: @WalesOnline/Twitter

Love knows no bounds, not even that of age. The cupid can arrive at your heart’s door and knock at any time.

In one such incident, an elderly man proved that age is just a number when it comes to the matters of heart and it’s never too late to find the one.

The 95-year-old man from the United Kingdom tied the knot for the first time in his life with his 84-year-old sweetheart.

Julian Moyle met Valerie Williams 23 years ago at the Calvary Baptist Church in Cardiff and proposed to her in February this year. The couple got married in the same church with close family and friends in attendance.

Julian said the joyous occasion felt like “celebrating new year” and Valerie was looking forward to “just being together”.

The heart-warming video doing the rounds on the Internet has received much love and restored people’s faith that one can find love at any age.

Julian Moyle has proved it's never too late to find the one.
The 95-year-old has got married for the first time in his life to his soulmate, 84-year-old Valerie Williams, and said the joyous occasion was "like a new year". pic.twitter.com/hkqF1vlGRw

In the video shared by WalesOnline, the newlyweds looked adorably in love. Valerie can be heard saying that she could not believe that the two were now married while Julian says ‘it’s marvellous’.

Valerie mentions how Julian plans on going to Australia later in the year when the husband interrupts that he’s taking her along to which every one in the audience burst into laughter.

On being asked about how he felt on not being a bachelor anymore, Julian quips that he couldn’t remember any other marriages.

Julian says he wishes to show Mrs Moyle off on their deferred honeymoon.

The man is all praise for the giving and kind nature of his first-ever wife.

The couple looked forward to each other’s companionship.