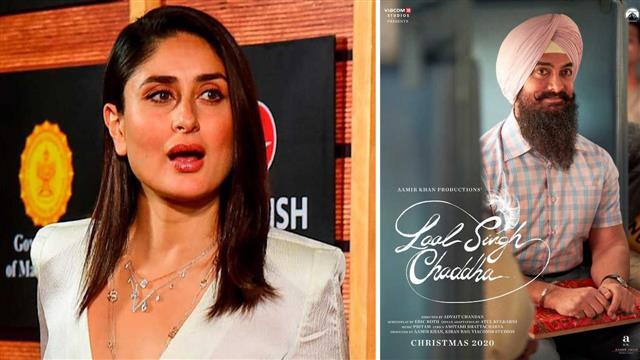 Kareena Kapoor Khan and the poster of Laal Singh Chaddha

The movie ‘Laal Singh Chaddha’ hits the theatres in less than two weeks. The film has actors Aamir Khan and Kareena Kapoor Khan in lead roles.

However, the boycott trend for the movie has been gaining momentum on social media ever since its trailer was launched in May.

Since netizens are quick to form opinions, the lead pair is being brutally trolled for their statements, including those made in the past.

Kareena during an interview with a journalist had made a statement saying that it’s the audience who made them (actors) famous and if they wish, they shouldn’t go and watch their movies.

Another victim of Burkha Butt 😂

Now I am sure #BoycottLaalSinghChaddha#AamirKhan's picture Will be a flop 😹

Seems like her statement backfired as netizens have picked it up and are using it against her upcoming release. They have started a boycott trend as they refuse to watch ‘Laal Singh Chaddha’.

You remember what #KareenaKapoorKhan & #AmirKhan said, if you forget, look at it.

Think for yourself what to do now in the month of Holy Sawan.#BoycottLaalSinghChaddha pic.twitter.com/i8JEfEHH2d

Talking about the ‘cancel culture’ Kareena in a recent interview with India Today acknowleged that opinions were developing but people must learn to overcome them.

“There are different platforms. Everyone has an opinion. So now, if that is going to be there, then you have to learn to ignore certain things. Otherwise, it will just become impossible to live your life. And that’s why, I don’t take any of this seriously,” said the actor.

Meanwhile, actor Aamir Khan faced severe criticism over the representation of dieties in his movie ‘PK’ and a statement he made during his show ‘Satyamev Jayate’ about offering milk in temples. He had also made a statement that goes, “Our country is very tolerant, but there are people who spread ill-will.”

Reacting to the #BoycottLaalSinghChaddha trend, Aamir had requested people to watch his film. “Boycott Bollywood, Boycott Aamir Khan, Boycott Laal Singh Chaddha, I feel sad because a lot of people who are saying this believe that I am someone who doesn’t like India. That’s quite untrue.

“I really love the country. That’s how I am. It is rather unfortunate that some people feel that way. I want to assure everyone that that’s not the case. Please don’t boycott my films. Please watch my films,” the actor pleaded.