Mumbai-Guwahati saga remained prominently in picture as rebel Sena MLAs, along with Shinde, had taken refuge in Guwahati hotel in backdrop of political turmoil in Maharashtra 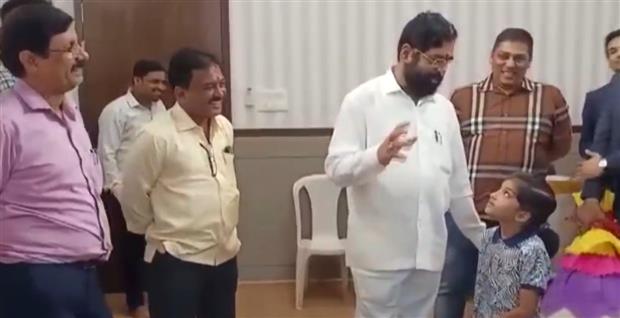 The girl, Annada Damre, had visited CM’s Nandanvan bungalow in Mumbai while she had put forth her demand to visit Guwahati before Shinde. Video grab- Twitter/@ANI

A video of a teenager girl has become center of attraction across social media platforms where she can be seen requesting newly elected Maharashtra CM Eknath Shinde to take her to Guwahati for a spin during her Diwali vacation.

The video has been shared by news agency ANI on Twitter.

#WATCH | After meeting Maharashtra CM Eknath Shinde at his Nandanvan bungalow in Mumbai, a girl Annada Damre requested him to take her to Guwahati during Diwali vacation and also asked if she could become the CM by helping flood-affected people just like he did?

The girl, Annada Damre, had visited CM’s Nandanvan bungalow in Mumbai while she had put forth her demand to visit Guwahati before Shinde. As the girl makes this peculiar demand, bystanders, along with CM, burst into laughter. Besides, the little girl had also asked Shinde if she could become CM of the state by helping flood-affected people like latter did.

Notably, Eknath Shinde had visited Guwahati last month along with disgruntled faction of Shiv Sena MLAs while parting ways with Sena chief Uddhav Thackeray. The turmoil continued for many days resulting in Uddhav relinquishing his position as CM of Maharashtra before floor test and Shinde becoming new CM of the state backed by BJP and rebel Sena MLAs.