Man drenches self in water-logged pothole in protest against dire condition of road, performs yoga before local MLA : The Tribune India

Man drenches self in water-logged pothole in protest against dire condition of road, performs yoga before local MLA

Locals also extended their unanimous supported to Hamza in his protest 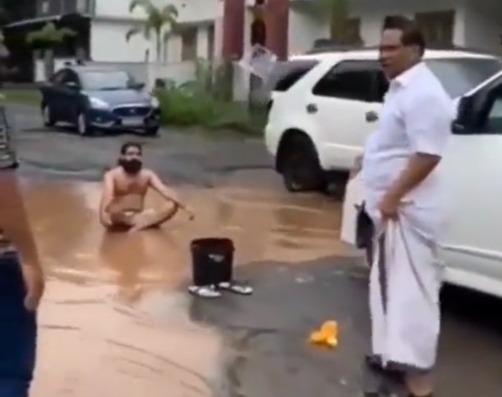 Disgruntled over the attitude of elected representatives of the area, Hamza decided to perform this peculiar act to address the issue. Video grab- Twitter/@KhabarChalisa

People from adopt different ways to carry out agitation, some to flag civic issues before authorities while others to get their personal hitch addressed. In the streak, an outlandish video has surfaced on social media, where a man can be seen carrying out an out-of-the-box protest against the dire road condition in his locality. The man takes bath in waterlogged pothole and performs yoga before local MLA to express his despair.

As per a report of News 18, residents of Pandikkad in Kerala's Malappuram district have perpetually been raising issue of poor road condition in their area. Disgruntled over the attitude of elected representatives of the area, Hamza decided to perform this peculiar act to address the issue.

Locals also extended their unanimous supported to Hamza in his protest.

Later, the MLA stated that he had raised the issue before concerned minister.