Marry a girl who can do this for you, writes a user 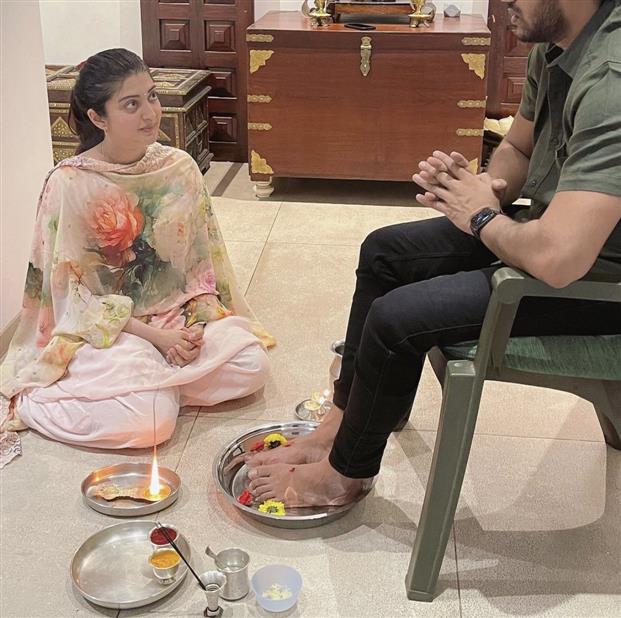 South-Indian actor Pranitha Subhash has been acclaimed for her work in Kannada, Telugu, Tamil, and Hindi films.

The actor keeps her fans updated by posting pictures from her life with her husband and baby girl.

However, a recent picture shared by Pranitha hasn’t gone down well with the viewers.

The actor posted a picture of herself on Twitter in which she can be seen sitting on the floor as her husband Nitin Raju sits on a chair with his feet on a thali. The couple can be seen performing a ritual. The caption read: “Bheemana Amavasya”.

The actor’s picture faced backlash and sparked several debates online on the grounds of being ‘misogynistic’ and ‘patriarchal’.

The picture drew severe criticism for allegedly being a representation of post-marital subjugation as it went viral.

It was criticised further when a Twitter user shared the same picture and wrote in the caption, “Marry a girl who can do this for you.”

Marry a girl who can do this for you ❤️ pic.twitter.com/xxPUpjXb5v

Expressing their displeasure, netizens started a debate on the expectations of subservience in a marriage.

One user wrote, “Nahi chaiye aesi gulam. (Don’t want a slave like this)” while another said, “Women are just fooled in the name of culture and tradition which is deeply patriarchal and discriminatory. Any rational woman should stand up to her rights and respect. This rollicking with such revelry of things which are absolutely regressive is quite unsettling.”

Attacking the user who wanted a girl doing the same as Pranitha in the picture, a user wrote: “Marry a guy who doesn’t expect that from you.”

Marry a guy who doesn't expects such things from you ❤ https://t.co/VygYQ6ycsz