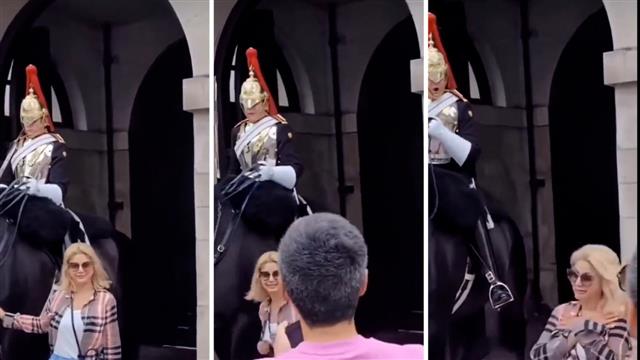 Two videos showing a Queen's guards on horseback screaming at tourists in London have sparked a major discussion online.

The videos—which has gone insanely viral—has been viewed millions of times and are flooded with hundreds of comments.

The reactions of the guards have not gone down well with many users slamming it.

The incidents were reported outside the Buckingham Palace when the tourists - both women - were posing for photos and got too close to the horse.

The clips were first posted on TikTok. One of the women was the mother of TikTok user Ethan (who goes by the username @_phigs), who vowed never to return to London, as per a report in Express.

The first video shows a number of tourists taking photo with the Royal guard stationed outside the Buckingham Palace in full uniform sitting on a horse. One of the tourists, in pink top, tries to touch the horse while the guard remains stern faced.

At the same time, another woman in a white t-shirt comes too close to the horse, and even tries to turn its head towards him using the reins.

"Stand back from the Queen's lifeguard, don't touch the reins!" the soldier suddenly yells, with the horse too lunging forward and then sideways.

The command sent the woman running away in shock as seen in the video.

This made TikTok user Ethan angry, who according to Express, posted on the platform: "We Will Never Return To London After This Incident."

While visiting London, it is a part of the tradition of getting a photo with one of the Queen's guards but there are certain rules such as no touching and getting close to them.