The woman showers the policeman with heartfelt blessings 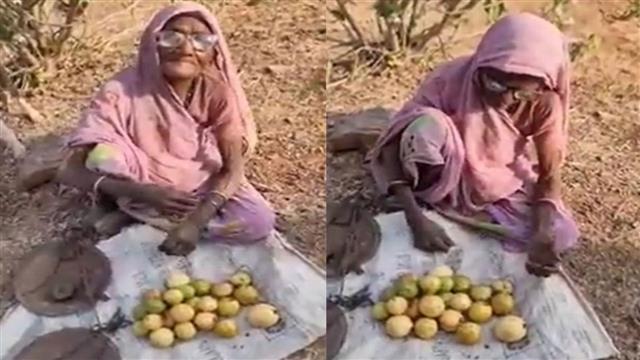 We never know how huge the impact of our small gestures could be. In one such incident, a policeman helping an elderly woman struggling to sell her last batch of fruit marked the power of his random act of kindness.

On spotting the elderly woman sitting at a roadside with some guavas on a mat and a dog accompanying her, the cop stopped his car and asked her the price of her fruit. She replied, “Rs 20 per kg.”

She gave away a toothless smile on being asked if the dog was hers.

The cop went on to ask her how long she had been sitting there. The woman said she was waiting for her guavas to be sold.

She said she had sold about a kg or two of guavas since morning and still had about two kg of fruit left to be sold.

He panned the camera to show that the place was deserted.

The cop asked if she will go home if he bought all of her fruit and she agreed.

She even told the cop that her name was Phulrani.

He then offered her a Rs 100 note for all of the guavas. The policeman urged the woman not to sit in scorching heat any longer and head home to rest.

Deeply moved and touched by his kind act, the woman showered blessings on the policeman.

"What a great gesture," wrote a user while other commented, "The best part of this video is the helper didn't show his face!"

Shared on Twitter by a user named Bundeli Bauchhar, the video amassed over a million views. According to the page's admin, the incident happened in Damoh, Madhya Pradesh, and the police officer's name was Avdhesh Kumar Dubey.