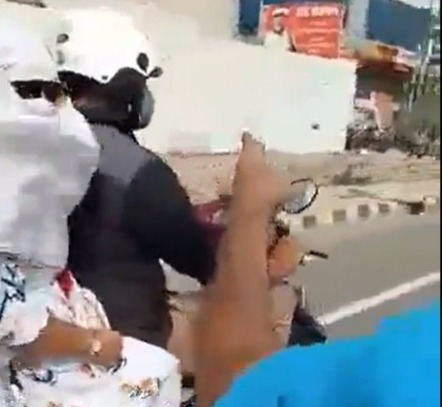 The woman had used her dupatta and sunglasses to cover her face but the husband discovered she was his wife. Video grab- Twitter/@rahulahir

A high-voltage drama unfolded on the road in Agra where a man caught his wife red-handed while scooting around the city with her alleged lover.

The husband-wife duo has been married for 10 years and their married life has reportedly been dealing with vicissitudes for last few days. They also have a daughter.

As per a report of Times Now, the couple had been at loggerheads for last couple of days, ever since the man learned that his wife is in extra-marital affair with a businessman. After a verbal spat on September 11, the woman left home without informing anyone. The perturbed father-daughter duo initiated a hunt on the roads outside only to spot the woman roaming around with another man on a scooty.

The woman had used her dupatta and sunglasses to cover her face but the husband discovered she was his wife. She got furious after being spotted and the man, she was on the pillion with, accelerated the vehicle to escape her husband chasing them. However, the husband managed to catch them up.

The entire drama took place in full public view and as per reports, both the men were fined for causing disturbance of the public peace.