Watch: Man gets stuck under elephant statue in a temple during ritual; leaves netizens amused : The Tribune India

In the video, he can be seen struggling in desperation to pass through but his efforts prove futile 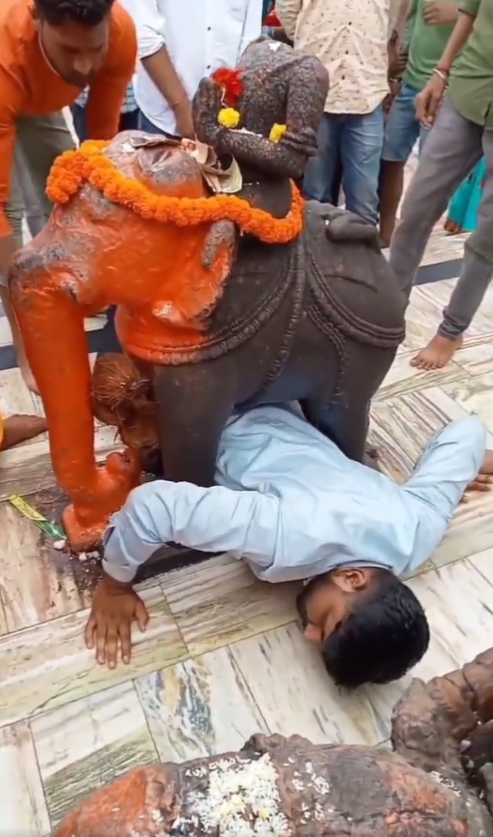 The man was performing a ritual when he got stuck under the statue. Video Grab

A video showing a man getting stuck between the legs of a small elephant statue while performing a religious ritual has gone viral. It seems he was performing a ritual when he got stuck under the statue. He can be seen struggling in desperation to pass through but his efforts prove futile.

Any kind of excessive bhakti is injurious to health 😮 pic.twitter.com/mqQ7IQwcij

In a video shared by a Twitter user Nitin, one can notice the man using his hands and body to wriggle out from under the statue but to no avail. “Any kind of excessive bhakti is injurious to health,” the video caption reads.

You can hear several people in the background instructing him to use certain techniques to get himself out from under the statue. “Tuck in your tummy,” one man could be heard saying. “Keep turning your midriff,” suggested another.

He even tries to turn his body around and people also provide a helping hand but the man remains stuck. Meanwhile, one of the person present there recorded this video.

The video, however, ends on a cliffhanger. It doesn’t show if the devotee managed to come out finally.

A Twitter claimed the incident was from Madhya Pradesh’s Narmada Mandir at Amarkantak. He said, “Locals say that if you’re paapi (sinner) then you’ll be stuck. Now that is their belief which should not be mocked. If you believe in something, that is fine. But don’t mock others.”

This is from Narmada Mandir, Amarkantak MP. Local say that if you're paapi then you'll be stuck. Now that is their belief which should not be mocked. You believe in some thing, that is fine. But don't mock others.

“Only fat people will get stuck, are all fat people paapis [sinners]?” countered the user who uploaded the video.

Another user said the video was “proof” that the man was a sinner.

Another user commented, “There should be a board mentioning MAX Waist Size.”