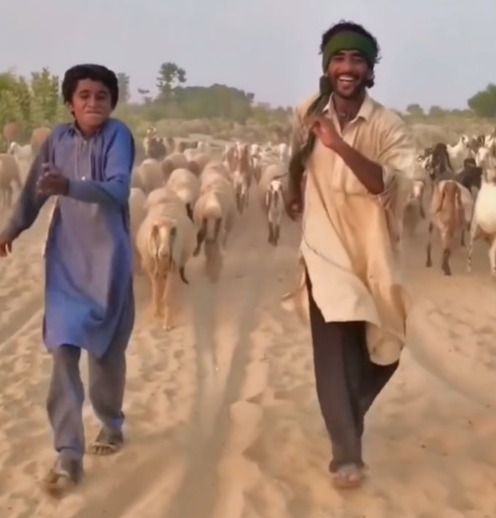 Dances to old Bollywood songs has been a trend of late. This time, a shepherd dancing to a ’90’s hit number has struck Internet’s fancy and taken social media by storm.

In a video shared on Instagram, the man can be seen dressed in a rugged kurta pyjama and joyfully grooving to the title track of ‘Dulhe Raja’ in what appears to be a desert. While the song was originally filmed on actors Govinda and Raveena Tandon, the shepherd dances with two boys in the video.

The most striking element in the video is that the shepherd has his sheep as ‘peeche ke baraati’ and donkeys as ‘agey ka band baaja’. While one of the boys tries to match his moves, the other enacts playing a flute seated on a donkey.

The sheer joy on their face as they enjoyed themselves left netizens desirous of a similar contentment. The shepherd received praises for his simple yet remarkable dance moves.

“Loved watching this!” wrote an Instagram user. “I simply can’t stop watching this,” commented another. “The sheep are much better backup dancers,” quipped a third.

Since being shared online, the video has amassed over seven thousand views.

Listen to the original track here: