Adults complain of not having him as their paediatrician in childhood 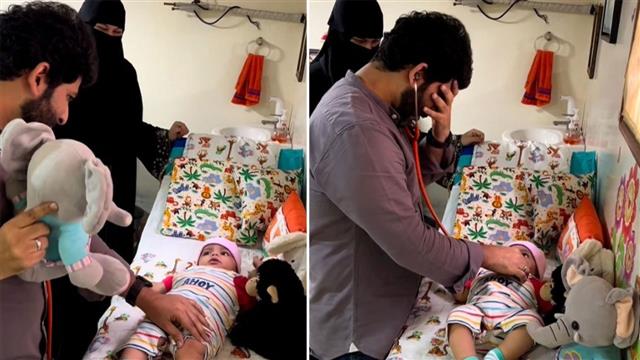 Video grabs of a Bengaluru doctor using fun techniques to distract a baby while giving her vaccine shots. Credit: dr_hifive/Instagram

Vaccination shots are not only stressful for kids but equally dreadful for the parents. However, this Bengaluru doctor’s unique way of making sure that the infant doesn’t cry after getting jabbed has been doing the rounds on the Internet.

The video was posted on Instagram by Dr Sayed Mujahid Husain, Consultant Pediatrician at Goodwill Children's Clinic in Bengaluru.

In the clip, a baby can be seen lying in the doctor’s office. The doctor standing around distracts her by making funny faces and goofy gestures.

His technique gets the baby comfortable and allows him to administer the vaccine shot. As soon as she begins to cry, his funny pokes and tickles make her giggle again and he manages to catch her attention with a soft toy making her forget about the needle prick.

The doctor later compliments “superb” and even “high-fives” the baby.

"These six month older ones are awesome, we adults are useless timid creatures!!!" read the caption of the video.

Netizens hailed his commendable skill of keeping the baby calm during vaccination. A user wrote, “You are not only a doctor, also an angel for infants, kids...hats off to you sir,” while other user commented, "Commendable effort."

Some even complained about not having a doctor like him in their childhood as a user said, “I wish I could have had a doctor like you in my childhood.”

The doctor was an instant hit with the parents as since being shared online, the video has amassed over a million likes.