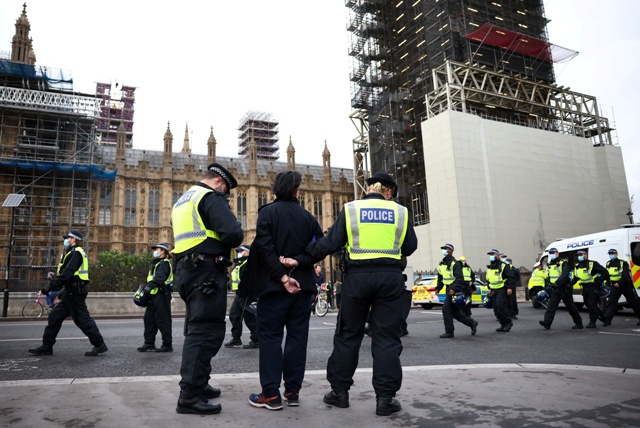 A demonstrator is detained by police as anti-lockdown protesters take part in a march, amid the coronavirus disease (COVID-19) outbreak, in London. Reuters

Scotland Yard said that its officers policing anti-lockdown demonstrations in central London have made 18 arrests, with three officers receiving minor injuries following clashes with the protesters.

Large groups of protesters were seen marching through the city on Saturday with banners and placards calling for “freedom” and an end to COVID-19 restrictions, which has currently placed the UK capital under Tier 2 – under which any gatherings over the “rule of six” are prohibited.

The Metropolitan Police said that it made arrests for a variety of offences, including breaching coronavirus regulations, assaulting an emergency service worker, violent disorder and for being wanted.

“One demonstration in particular attracted a large number of protesters and I became increasingly concerned that those in the crowd were not maintaining social distancing or adhering to the terms of their own risk assessment,” said Commander Ade Adelekan, leading the Met Police’s operation over the weekend.

“Organisers did not take reasonable steps to keep protesters safe which then voided their risk assessment. At this point, officers then took action to disperse crowds in the interests of public safety,” he said.

Large crowds gathered outside Buckingham Palace before moving on to Trafalgar Square. Scenes caught on social media showed officers trying to control and disperse the crowds. The Met Police said that the vast majority of people listened to officers and quickly left the area.

Demonstrators could be seen demanding an end to the “tyranny” of the new rules amid the pandemic and some also voiced opposition to vaccines.

Under England’s tiered and localised lockdown regulations, no one can participate in an outdoor gathering of more than six people unless some limited exemptions apply.

A separate smaller group of demonstrators also gathered at Parliament Square earlier on Saturday as part of the Stop Trump Coalition, ahead of the US presidential elections next month. PTI